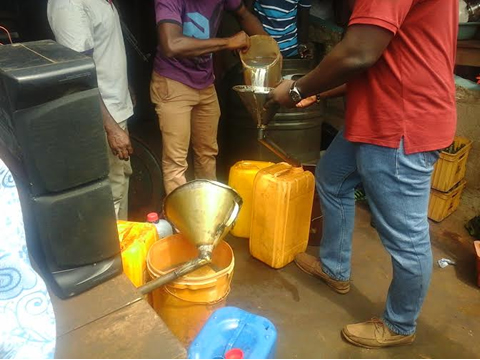 For the entire eight years in government the National Democratic Congress led government failed to manage prudently the proceeds of the premix fuel allocated to the various landing beaches in the country, Western Region Coordinator of the Premix Secretariat, Sly Akoful has alleged.

According to him, the management of the premix during the previous government was fraught with embezzlement, extortion and diversion. Mr Akoful in an exclusive interview with Skyy News explained that the former coordinators and committees that served under the secretariat undermined provisions in the LI 2233.

“There was no management at all of its finances. We came to meet no money the premix- coffers let alone know where premix went” he cried.

He stressed that the LI required that the landing beach committees retain in a dedicated bank account 53 percent of the proceeds from the Premix fuel to support community development but “the some of them in the previous administration, did not do as the L.I required of them”

Mr Sly Akoful continued that the secretariat under the current administration undertakes routine auditing of accounts to curb any instance of financial malpractice.

“Just last year an audit team from the National Premix Secretariat went to all the 58 landing beach committees, and we were told that those who did not present their statement of accounts were going to lose their franchise” he revealed.