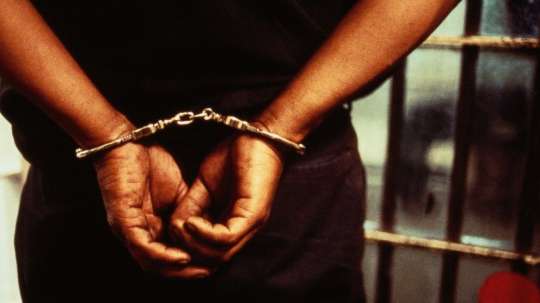 The Asankragwa District Police Command has arrested two National Security personnel and some other eight individuals for robbery. The culprits who were arrested for robbing some miners of their gold and other items at gunpoint, included a driver, George Ohene Adjei 56, Jonathan Ayeh 28, Jackson Agyemang 29, Isaac Okuampah 29, Patrick Fordjour, and Samuel Obeng 35. The rest are two National Security personnel; Anas Adams 35, and Gorge Osei 35.

The suspects, according to the Asankragwa District Commander, Superintendent Nana Kumi, were arrested last Saturday April 25, 2020, on the main Asankragwa-Wassa Dunkwa stretch. They were driving a black Toyota land cruiser with registration number, AS  6646-20. One of the suspects whose name was given as Kofi Asante however managed to escape.

Further search in the vehicle by the police found, 15 mobile phones, some foreign currencies, 2 set of military uniforms and gold concentrate in gallons. The suspects who were dressed in a military uniform arrived at the mining site in Atalla, a community close to Asankragwa in the Amenfi West Municipality of the Western Region. They subjected workers at the mining site to severe beatings and handcuffed some of them making away with their belongings.

“They were arrested at our security check point mounted between Asangragwa and Wassa Dunkwa they refused to stop when the police ordered them to stop and this arose suspicions. The police gave them a hot chase and they were arrested with the exhibits” Superintendent Nana Kumi indicated in an interview with Samuel Kaakyire Obuobi of Ahobrasie FM in Asankragwa.

Chief Superintendent Nana Kumi tell us the flagstaff house has been informed about the arrest, and the involvement of the National Security personnel. According to him, the suspects are currently in detention assisting the police in further investigations.

Update ((Audio)): Police narrates how the Asuahyiam robbery was carried out