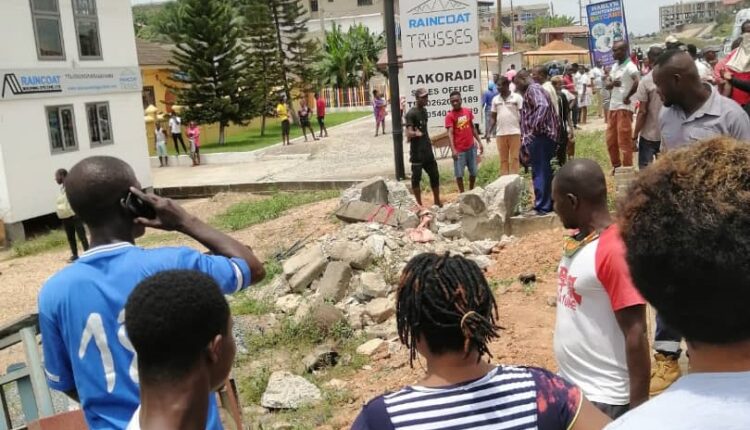 The Western Region MTTD Commander, Isaac Kwesi Sorkpah has confirmed the death of a teenager through an accident in Takoradi.
The incident that happened on Monday, April 5, 2021, involves a police officer whose name has been given as Owusu who was driving an unlicensed private vehicle on the main Anaji to Ntankoful Highway. According to reports, the Police officer was chasing a driver who had refused to stop at a barrier when his brakes failed.
The private vehicle of the police officer, unfortunately, could not spare a 12-year-old girl egg seller who was crossing the road.
His vehicle hit the young girl and she died instantly.
The mutilated body of the teenager was spotted lying in a bad state at the spot where the accident happened. According to eyewitnesses, the police officer was also left unconscious and has been sent to the Effiankwanta Regional Hospital for medical attention.

The mother of the egg seller who was informed rushed to the scene and started shedding uncontrollable tears after seeing the scattered body of her daughter.
According to the MTTD commander, the Police have officially begun investigations into the issue.
He adds that the said Police officer was not on duty today.
He adds that there is no clear evidence to suggest that he was chasing another car.
“The suspect is a Police officer. He is not an MTTD personal and was not on duty today at the time of the accident. He was driving a private car at the time of the accident. For now, he is in a critical condition at the Effiankwanta Regional Hospital”. Isaac Kwesi Sorkpah noted.
Eyewitnesses who were at the scene expressed shock at the conduct of the Policeman in question and indicated that he could have avoided the accident.
They alleged that the policeman was chasing the driver to collect money when he lost control.
“He was chasing the driver at a top speed. He did not even notice an egg seller was there because of the money he was chasing. Look at the sad body of this young girl”. One of the witnesses on the scene narrated.