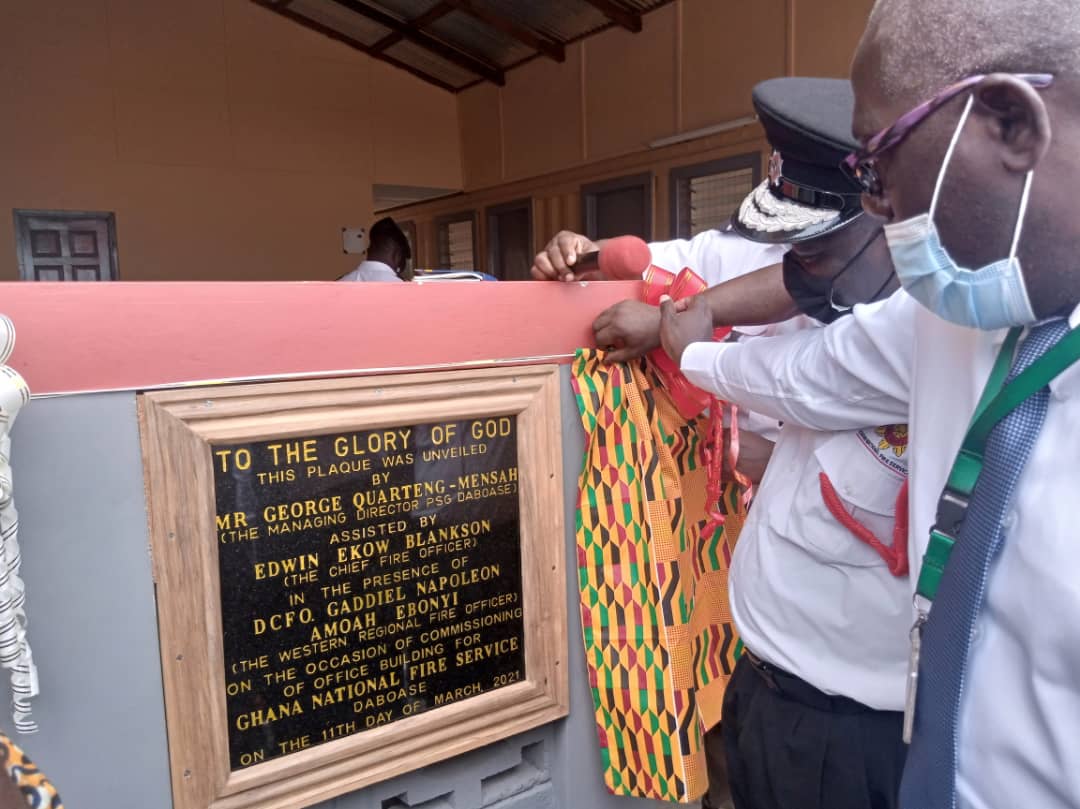 Plantation Socfinaf Ghana (PSG) Limited, a company into responsible tropical Agriculture, has built a new fire station for the Ghana National Fire Service (GNFS) at Daboase in the Wassa-East District. 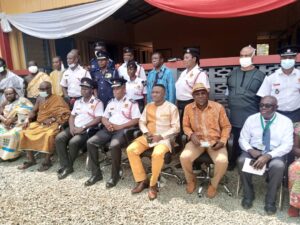 Mr Adu-Twum said the GNFS had outlined measures to end fire outbreaks and charged personnel at the station to work harder to achieve the set target.

He said the service had designed forensic stores at the head office to track fire outbreaks across the country, adding that five fire clinics were to be established in the country with one in the Western Region. 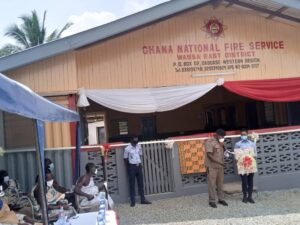 The Deputy Fire Officer said the service had procured 85 fire engines and assured the Wassa-East District of getting one.

Mr.Adu-Twum said management would furnish the Daboase office with furniture and other logistics and charged fire officers at the station to maintain the structure.

Mr.Adu-Twum reminded staff of the service to observe all the COVID-19 safety protocols.

The Human Resource Manager of PSG, Mr. William Agyei Amponsah on behalf of the Managing Director, Mr. George Quarteng-Mensah said the almost GHc100,000 edifice, would serve about 40 communities and the PSG company in times of fire outbreaks.

Mr. Quarteng-Mensah said PSG would continue to partner government and traditional rulers to chart a common path for development.

He said PSG had repaired one of the two fire tenders, which developed a mechanical fault for the GNFS and built a school block for the Daboase Senior High Technical School.

He asked staff to ensure cleanliness and maintain the facility.

In a welcoming address, the Western Regional Fire Officer, DCFO Gaddiel Napoleon Amoah Ebonyi pleaded for a vehicle, a photocopier machine and other logistics for conducive work.

He said the GNFS would intensify its patrols around the operational enclave of PSG Company to deal with any fire outbreaks.

The Member of Parliament (MP) for Wassa-East, Mr Isaac Adjei-Mensah lauded PSG for their efforts, but pleaded with the company to extend similar services to the Ghana Police Service(GPS), especially a vehicle to enhance their patrols.

He pledged to assist the fire station with office equipment.

The District Chief Executive (DCE), Mr Wilson Arthur said the fire station situated on the premise of PSG, was strategic and would safeguard the company in times of distress.

He said the Assembly would come in to build another fire station for the District.