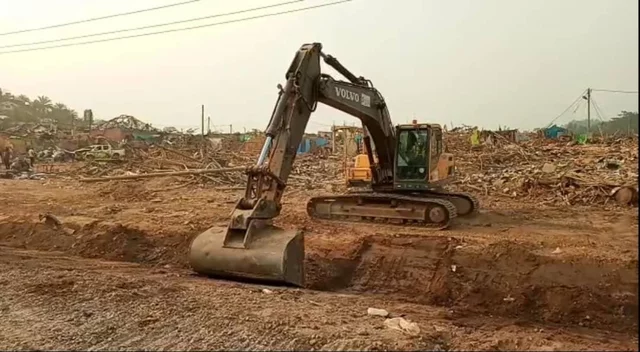 Plans to reconstruct the tragedy-hit Appiatse community has started in earnest as a lot of companies have shown interest to help in the re-construction.

Key amongst them is the State Housing Corporation, the Ghana Chamber of Mines, who have offered to provide building materials of fifty thousand dollars, and a host of others.

According to Dr Isaac Dasamani, the Municipal Chief Executive (MCE) for Prestea Huni-Valley Municipal, all was set for the rebuilding of the community.

“Now we are only waiting for the EPA to clear us that the place is appropriate for us to start re-building.

“As soon as they give us the green light, we will get a bulldozer to clear of the site and remove all the debris and start”, he said in an interview with the GNA.

He mentioned that other companies have donated various building materials including; woods and roofing sheets and described the support as massive.

Ghana Gas has issued a cheque for GHS 2 million to support the reconstruction project.

In a related development, residents of Appiatse have formed an 18-member committee to coordinate support services and formalise their engagements with authorities.

Members of the Committee told the GNA that some individuals who did not reside in Appiatse were “posing as victims” in a bid to benefit from the donations.