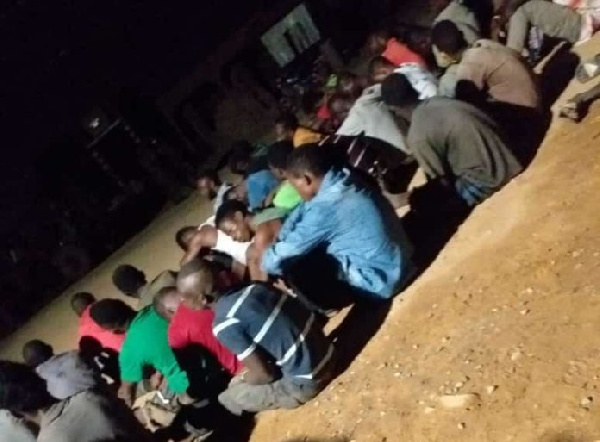 Over 70 apprehended for attacking two soldiers at Dome Faase

More than 70 persons have been arrested after two military officers were attacked at Dome Faase near Accra.

A military contingent was deployed to the town to restore calm forcing residents to flee to avoid arrest.

The uniformed men reportedly clashed with rampaging residents on Tuesday, while protecting a parcel of land owned by a sub-chief of Akyem Apedwa.

Images widely shared online capture the two soldiers bleeding profusely as they are being surrounded by the mob granting interviews to reporters at the scene.

One of them who identified himself as Clement Asare-Addo said warning shots had been fired with the hope of dispersing the agitated residents. However, this backfired.

“Our work is that we give a warning shot and when they stop then their leader and our leader will sit down and talk. But this one, it didn’t happen like that. They came to us and attacked us saying that we came here voluntarily,” he said.

According to the army officer, the residents accused them of not having been officially assigned to that post.

He added that even after explaining to the leader of the group that they were not criminals, the group simply would not listen to reason and proceeded to beat him and his colleague up.

“Their leader came there and we informed him that we are not criminals. So if there is anything else, they should exercise patience and lead us to your chief or wherever then we continue,” he pleaded.

Clement said their pleas and cries of innocence fell on deaf ears as the residents continued to beat them.

The residents had been demonstrating over the ownership of the land when the incident occurred.

They had earlier claimed that there have been rumours of armed land guards working with military personnel to terrorize their communities.

“Three weeks ago we heard rumours of activities on Ga lands that fall precisely under the Domeabra Obong constituency. Further investigations revealed that the presence of a team of armed land guards was working with some military personnel terrorizing the communities, claiming the Akyem stool sent them,” a spokesman for the residents told reporters.