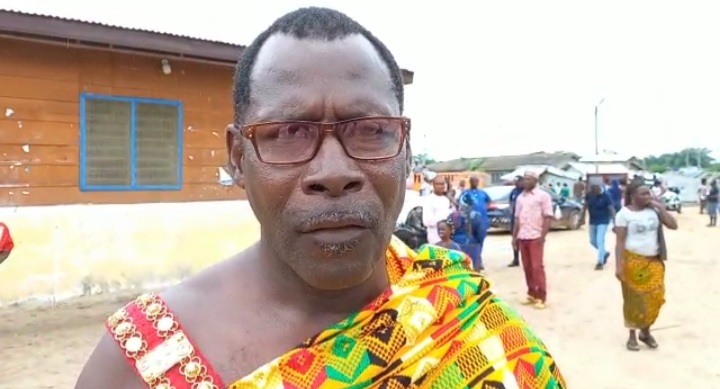 The Chief of Ampain in the Ellembelle District of the Western Region, Nana Nyameke fofole has retreated that his community has never regretted hosting Ivorian refugees when conflict ensued in their country.

In 2011, Ampain in the Ellembelle district of the western region play host to hundreds of Ivorian refugees as a result of the 2010-2011 Ivorian crisis which was highly political in nature. The war began after Laurent Gbagbo, the President of Ivory Coast since 2000 was proclaimed the winner of the 2010 Ivorian election, the first election in the country in 10 years.

Speaking exclusively to Skyy News on the sidelines of this year’s World Refugee Day Celebration in Ghana held at Ampain, Nana Nyameke Fofole mentioned that his community has never regretted hosting the Ivorian refugees in any way contrary to reports that the refugees have infiltrated his community with various deviant characters.

Added that, he will continue to ensure peaceful co-existence between the indigenous residents of the Ampain and the refugees.

World Refugee Day was first celebrated on June 20th, 2001 to commemorate the 50th anniversary of the 1951 Convention Relating to the Status of Refugees. On World Refugee Day, the contributions of refugees’ across the globe are celebrated and also seek to build empathy and understanding for their plight and their resilience to build a brighter global community.