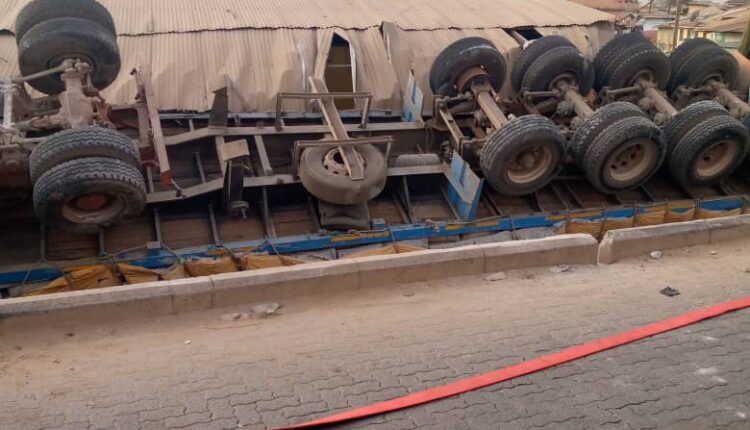 One person is reported dead after a trailer loaded with cement overturned at the Inchaban Police barrier in Takoradi.

The sad incident that happened on Thursday, April 8, 2021, has caused massive traffic on the road. According to reports, the trailer with registration number GT 8117-X had loaded cement from Takoradi and was heading towards the main Accra road when the sad incident happened.

The young man who has been identified as Agya Abakah is a staff with Amandi Constructions and is believed to be in his early twenties. He was on his way to work when the trailer overturned on him.

It took the intervention of the Ghana National Fire Service and the Police to rescue the lifeless body of the young man.

According to eye witnesses, the body of the young man has been deposited at the mortuary for further investigations.

In the main time, personnel from the Ghana Police Service have announced their presence on the road to ensure free traffic flow.

“Where the accident happened is just a minute drive from the Inchaban Police Barrier. The Trailer overturned just at a spot where people meet to watch football but fortunately there was no one there at the time of the Accident. A young man who was on his way to work early in the morning was badly affected after the trailer fell on him. He is wearing his safety boot and was going to work. He was walking along the road when the cement vehicle overturned on him. The trailer driver was negotiating a curve at the Police barrier when he overturned. The Fire Service and the Police are still on the road trying to clear the trailer for other users to move. There is currently heavy traffic on the road with no one moving”. An eye witness whose name has been given as Gadafi reported.