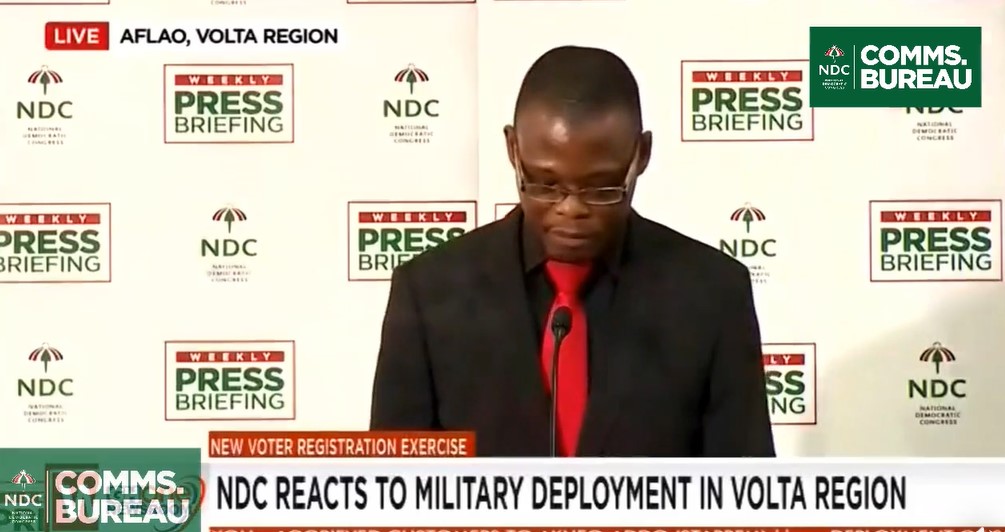 The opposition National Democratic Congress (NDC) has lambasted the ruling New Patriotic Party (NPP) government over the seeming influx of security forces in the Ketu South Municipality, ahead of the voter registration exercise. The party in a press conference in Aflao accused government of intimidating residents of the area, and other border communities in the Volta Region with the dense military and police personnel that have been deployed there.

Member of Parliament for the area, Fiifi Fiavi Kwetey in his address at the conference labelled the NPP, as obsessed with political power, and having demonstrated over time a hatred for the Voltarians.

“This siege in the Volta Region dates back to NPP’s perennial hatred towards any group of people they perceive as standing between them and their insatiable desire for absolute political power” he fired.

He argued that the justification by the Municipal Chief Executive for the area, and the Volta Regional Minister, that these troops are only there to reinforce border security to avert an importation of the novel coronavirus, are not tenable. He maintained that the real intent of the said action, is to cause fear in the people during the registration exercise.

“The total COVID-19 case count in Togo stands at about 615, which is less than the Greater Accra, Ashanti Region, Western Region, Central Region and just about 75 cases above the case count in the Eastern Region. So if there’s any fear of COVID it should rather be the people of Togo who should be afraid of Ghanaians crossing the border to spread COVID-19 in Togo and not the other way round” he emphasized.