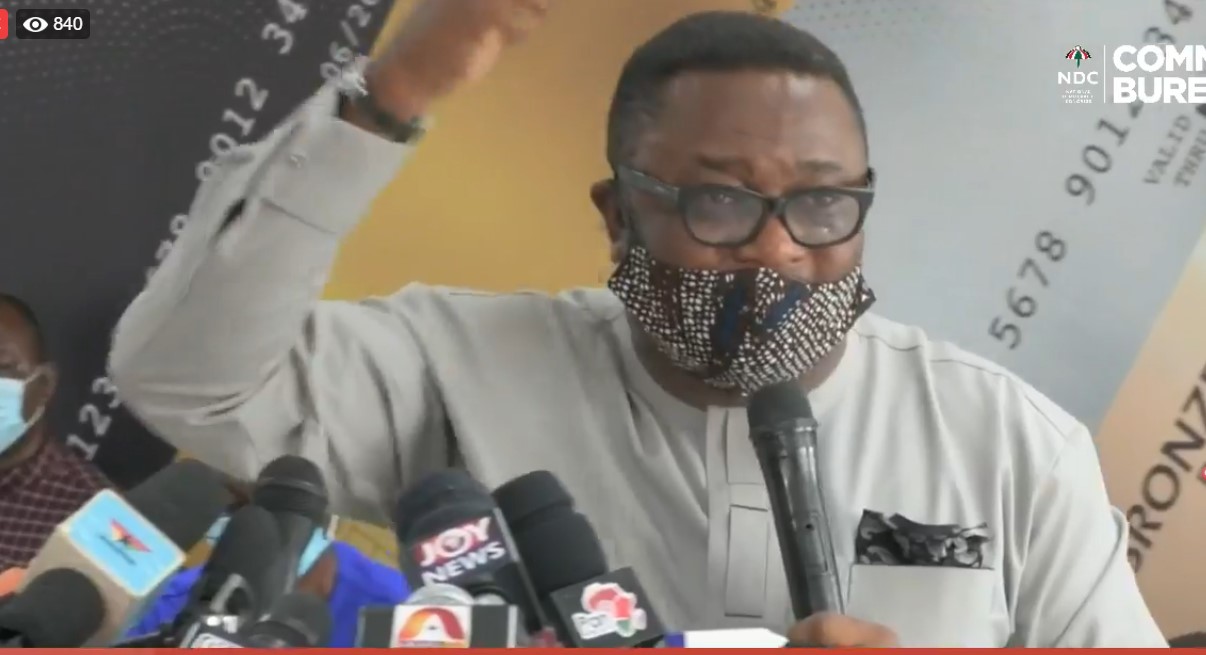 The Director of Elections of the National Democratic Congress (NDC), Mr Elvis Afriyie Ankrah has described as preposterous and insulting, claims made by the General Secretary of the ruling New Patriotic Party (NPP), John Boadu that the proposed Constitutional Instrument presented to parliament by the Electoral Commission (EC), to determine voter requirement for the compilation of the new register, has already been deliberated on by political parties.

Throwing jabs at the NPP and the EC’s Jean Mensah, Mr. Afriyie Ankrah justifications put forth by the NPP on the protested new voter register, has not been an intelligent one.

The Director of Elections for the opposition NDC in a press conference held at their head office today, questioned how a CI which was laid before parliament on 17 March, 2020; be said to have already been discussed by political parties eight days (25 March, 2020) later before submitting to parliament for debate and approval.

“The claim by the NPPP that the proposed CI was discussed at the 25 March IPAC meeting, is a concocted bear face lie, as the matter was neither on the agenda of the said IPAC meeting nor captured in the records meeting of the said meeting. The proposed C.I was laid in parliament on the 17 March 2020, 8 clear days before then.

“So how then do you say that the CI that has already been laid in parliament was discussed in a subsequent IPAC meeting? Complete falsehood. And a very unintelligent one like than” he jabbed the General Secretary of the NPP.

Mr. Afriyie Ankrah argued further that the compilation of the new register will disenfranchise over 10 million eligible voters, with most of which located in their strong holds.

“… the registration requirement under the proposed constitutional requirement which have been laid in parliament by the EC, that is the Ghanaian passport which has less than 2 million holders of 18 years and above, or the Ghana card with just about 6.5 million holders who are 18 years and above, to govern the needless, illogical and wasteful new registration exercise they intend to undertake are too narrow and wholly inadequate for the purpose of identifying eligible voters which is estimated about 18 million.

“And this we see as part of grand conspiracy between the EC, NIA and the ruling to disenfranchise over 10 million eligible voters mostly in NDC strong holds” he contended.

He presented evidence of a statement Chief Justice Georgina Theodora Wood made regarding the Abu Ramadan Voter Register case, as sufficient justification for the need to use the exiting biometric register as eligibility to vote.

EC, NIA given green light to under mass registration exercises

IPAC no more relevant to us- NDC