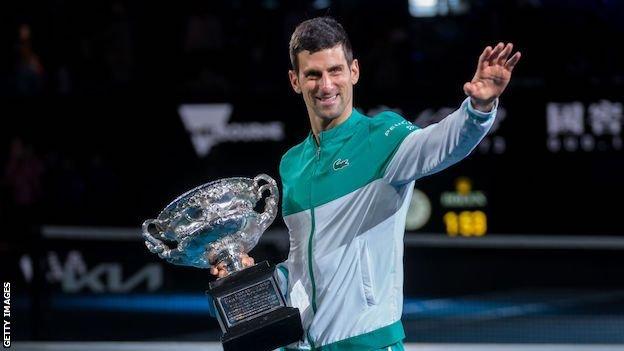 Novak Djokovic says it has taken “a lot of blood, sweat and tears” to break Roger Federer’s record of 310 weeks ranked as world number one.

The 33-year-old Serb set the record on Monday for most weeks at number one in the 48-year history of the ATP rankings.

“My family have supported me for day one,” he told BBC World Service.

Djokovic, whose longest continuous run at the top was 122 weeks between July 2014 and November 2016, paid tribute to the 39-year-old Federer, who is competing at this week’s Qatar Open, his first tournament since the Australian Open in 2020.

“What Roger is doing still at his age is something that is very inspirational for me and many other tennis players, and it’s great to see him back,” said Djokovic.

The Serb’s Australian Open triumph leaves him only two wins behind the joint holders of the men’s Grand Slam singles record, Federer and Rafael Nadal – the men he said had made him the player he is today.

“When I started in the men’s professional tennis world 15 years ago, I had two of the highest challenges, which was to overcome Roger and Rafa.

“Back in 2008, when I won my first Grand Slam, I thought OK, this is now my time. I’m going to be competing with these guys; I have the ability to win slams.

“But then, for three years, I didn’t win a major title and I was losing most of my big matches against them.

“They made me really sit and realise what I need to do, and how I need to improve in order to win against them.

“They definitely made me the player that I am today. Those rivalries are the ones that were the most impactful on my tennis game and evolution,” he said.