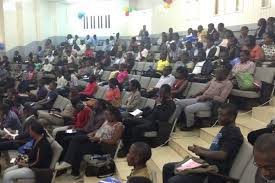 The first ever global trends for adolescent insufficient physical activity show that urgent action is needed to increase physical activity levels in girls and boys aged 11 to 17 years. The study, published in The Lancet Child & Adolescent Health journal and produced by researchers from the World Health Organization (WHO), finds that more than 80% of school-going adolescents globally did not meet current recommendations of at least one hour of physical activity per day – including 85% of girls and 78% of boys.

The study – which is based on data reported by 1.6 million 11 to 17-year-old students – finds that across all 146 countries studied between 2001-2016 girls were less active than boys in all but four (Tonga, Samoa, Afghanistan and Zambia).

The difference in the proportion of boys and girls meeting the recommendations was greater than 10 percentage points in almost one in three countries in 2016 (29%, 43 of 146 countries), with the biggest gaps seen in the United States of America and Ireland (more than 15 percentage points). Most countries in the study (73%, 107 of 146) saw this gender gap widen between 2001-2016.

The health benefits of a physically active lifestyle during adolescence include improved cardiorespiratory and muscular fitness, bone and cardiometabolic health, and positive effects on weight. There is also growing evidence that physical activity has a positive impact on cognitive development and socializing. Current evidence suggests that many of these benefits continue into adulthood.

To achieve these benefits, the WHO recommends for adolescents to do moderate or vigorous physical activity for an hour or more each day.

The authors estimated how many 11- to 17-year-olds do not meet this recommendation by analysing data collected through school-based surveys on physical activity levels. The assessment included all types of physical activity, such as time spent in active play, recreation and sports, active domestic chores, walking and cycling or other types of active transportation, physical education and planned exercise.

To improve levels of physical activity among adolescents, the study recommends that:

The highest levels of society, including national, city and local leaders, should promote the importance of physical activity for the health and well-being of all people, including adolescents.

“The study highlights that young people have the right to play and should be provided with the opportunities to realise their right to physical and mental health and wellbeing,” says co-author Dr Fiona Bull, WHO. “Strong political will and action can address the fact that four in every five adolescents do not experience the enjoyment and social, physical, and mental health benefits of regular physical activity.  Policy makers and stakeholders should be encouraged to act now for the health of this and future young generations.”

The new study estimated for the first time how trends changed between 2001-2016 – applying the trends from 73 countries who did repeat surveys during that period to all 146 countries.

Globally, the prevalence of insufficient physical activity slightly decreased in boys between 2001 and 2016 (from 80% to 78%), but there was no change over time in girls (remaining around 85%).

The authors note that if these trends continue, the global target of a 15% relative reduction in insufficient physical activity – which would lead to a global prevalence of less than 70% by 2030 – will not be achieved. This target was agreed to by all countries at the World Health Assembly in 2018.

In 2016, Philippines was the country with the highest prevalence of insufficient activity among boys (93%), whereas South Korea showed highest levels among girls (97%) and both genders combined (94%). Bangladesh was the country with the lowest prevalence of insufficient physical activity among boys, girls, and both genders combined (63%, 69% and 66%, respectively).

Some of the lowest levels of insufficient activity in boys were found in Bangladesh, India and the USA. The authors note that the lower levels of insufficient physical activity in Bangladesh and India (where 63% and 72% of boys were insufficiently active in 2016, respectively) may be explained by the strong focus on national sports like cricket. However, the US rates (64%) may be driven by good physical education in schools, pervasive media coverage of sports, and good availability of sports clubs (such as ice hockey, American football, basketball, or baseball).

For girls, the lowest levels of insufficient activity were seen in Bangladesh and India, and are potentially explained by societal factors, such as increased domestic chores in the home for girls.

“The trend of girls being less active than boys is concerning,” said study co-author Dr Leanne Riley, WHO. “More opportunities to meet the needs and interests of girls are needed to attract and sustain their participation in physical activity through adolescence and into adulthood.”

To increase physical activity for young people, governments need to identify and address the many causes and inequities – social, economic, cultural, technological, and environmental – that can perpetuate the differences between boys and girls, the authors said.

“Countries must develop or update their policies and allocate the necessary resources to increase physical activity,” says Dr Bull. “Policies should increase all forms of physical activity, including through physical education that develops physical literacy, more sports, active play and recreation opportunities – as well as providing safe environments so young people can walk and cycle independently. Comprehensive action requires engagement with multiple sectors and stakeholders, including schools, families, sport and recreation providers, urban planners, and city and community leaders.”

impulsive buying, a financial disaster, here’s how to end it

World’s loudest bird is louder than a motorcycle

Deposit insurance in the banking sector to be rolled out soon...

In some languages, love and pity get rolled into the same...

What Your Fridge Says About Your Sex Life

We have no control over textbooks – NACCA

5 Things You Need to Stop Telling Yourself if You Want...

The First Text To A Girl: Why It’s More Important Than...