Home Chieftaincy & Local Government National House of Chiefs didn’t agree to back ”No Vote” in Referrendum... 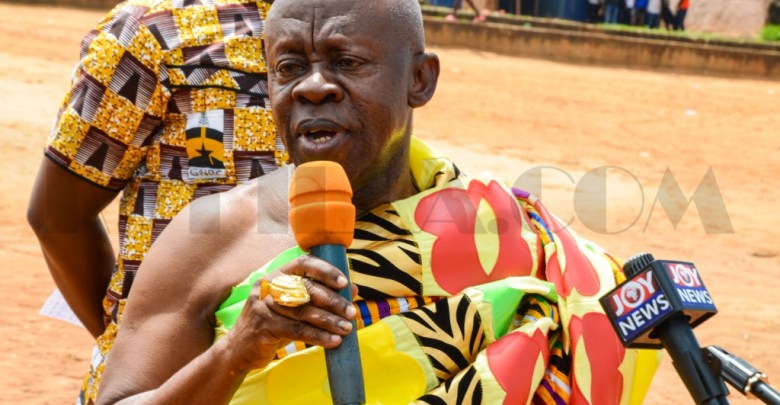 President of the Western Regional House of Chiefs and Omanhene of the Sefwi-Anhweaso Traditional Area, Ogyeahoho) Yaw Gyebi II, insists that the National House of Chiefs has not met to decide on whether or not to back either sides of the December 17th referendum, despite a press release from Togbe Afede XIV, which suggests otherwise.

Togbe Afede XIV, the Agbogbomefia of the Asogli State and President of the National House of Chiefs in a series of statements has maintained that Nananom had unilaterally agreed to strongly reject multi-party participation at the local governance level.

Togbe Afede XIV responded again, stating that “Any suggestions that the proposed referendum to allow partisan politics in local elections was not discussed by the House is not only dishonest but wanton mischief”.

However, in an exclusive interview with Skyy News Ogyeahoho) Yaw Gyebi II in denying the statement, explained what happened when the House met.

”National House of chiefs has never met to say that Ghanaians sghould vote ‘no’. The House was approached by the Deputy Minister of Local Gvernment to explain the modalities involved in the election referendum etc. After that, Nananom in their wisdom realised that under the present consitution, 30% of the assembly people are nomimnated by the president in consultation with the National House of Chiefs. So we were also asking that, now that voting was going to replace nominations, a certain percentage ought to be reserved for Nananom and the paper was written by Nana Susubiribi Krobea Asante, Omanhene of the Asokore Mampong Traditional Area to the ministry of local government.

Ogyeahohoo Yaw Gyebi II, who doubles as the Head of the Governance and Development Committee of the House, therefore expressed surprise at Togbe Afede’s stance.

”Since then, we have not met but in principle, we all accepted that this referendum should go on so some of us are surprised that Togbe came out to say that we agreed to tell our people to vote no. At any rate, when the National House of Chiefs or the Standing Committee meets to take a decision, it is the registrar who carries our message to the press. It is not the President and his vice that will go and sign any document and say it is the view of Nananom” he further noted.

“I Remember Sammy Awuku, Nathaniel Attoh and My Girlfriends at Wey-Gey-Hey...