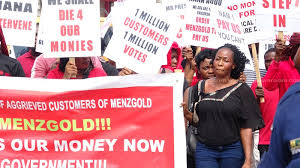 After months of silence over what his company intends to do regarding the locked up cash of customers, Nana Appiah Mensah, popularly known as “NAM1” finally addressed the press and customers of  the company in a press conference yesterday.

In October 2018, the Securities and Exchange Commission of Ghana closed down Menzgold for engaging in deposit-taking without licence. Chief Executive Officer and founder of the company, Nana Appiah Mensah has since had his assets and company accounts frozen, and is presently facing trial for defrauding by false pretence, and money laundering.

Speaking at the press conference on Monday, he made it clear that he will only be able to pay his customers when government unfreezes his personal and company accounts which have been held by investigators. This he explained, will enable him to utilize these  “as vehicles to get productive in other to meet our liabilities, owed to our customers and some business associates in our bid to resolve our liabilities immediately.”

“To be honest, the press conference did little to lift our spirits because our expectations were not met. When we gathered there as a group, our expectation was that Nana Appiah Mensah would give us the timelines within which he intended to pay us our monies. Or that he would communicate an elaborate plan with which he intended to pay us within a stipulated period of time. That was our main expectation but sadly, it was not met,” Samuel Agyarko stated.