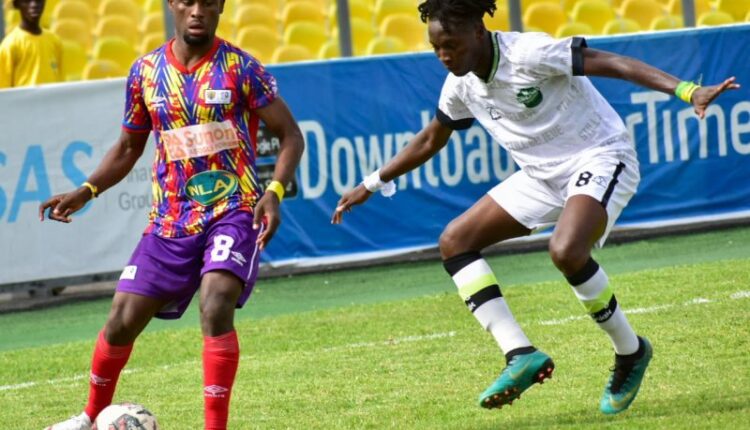 Accra Hearts of Oak reached their second successive finals in the MTN FA Cup after beating Dreams FC 3-2 in the semi-final clash at the Accra Sports Stadium.

Goals from Benjamin Yorke, Daniel Afriyie Barnieh, and Seidu Suraj ensured victory for the defending champions against a Dreams side who played 30 minutes with a man down inside the second half.

Hearts had a slow start to the game and they were punished in the fourth minute after Dreams playmaker Slyvester Simba curled in a brilliant effort just outside the penalty box.

But the Phobians responded with an equalizer from Yorke in the 11th minute, tapping in from close range after Barnieh’s shot was too hot to handle for Dreams goalkeeper Augustine Koomson.

The match was indeed fascinating to watch with some end-to-end action from both sides and Gladson Awako nearly put Hearts into the lead halfway through the first half, but his header from close range skewed wide.

Dreams FC in the latter stages of the first half were very dangerous in attack and striker Samuel Boakye should have capitalized on a half chance but his header couldn’t find the target.

The first half ended one all.

Hearts had a good start to the second half as they went into the lead with 20 seconds played after Barnieh fired the ball into the roof of the net with goalkeeper Augustine Koomson having no clue as to where the ball was.

Things got very bad for Dreams FC as Ibrahim Issah was sent off by Referee Senorgbe Rustum after a reckless challenge on Hearts defender Mohammed Alhassan in the 56th minute.

Hearts were in cruise control after the hour mark and added the third goal after Seidu Suraj’s deflected shot looped past Dreams substitute goalkeeper Solomon Agbasi in the 65th minute.

Despite being a man down, Dreams FC were very impressive in attack and pulled a goal back in the late stages of the game through substitute Kweku Karikari.

Hearts of Oak survived the late scare from Dreams as they held on to secure a place in the finals as they await winners of the other semi-final encounter between Aduana FC and Bechem United.