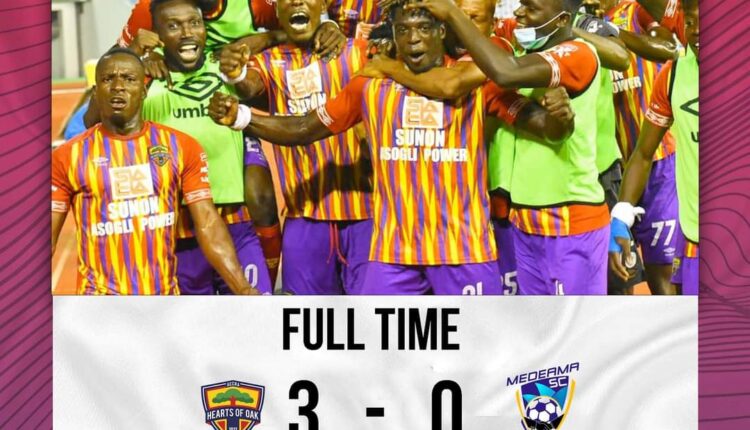 The Phobia boys gave an excellent performance to beat off competition from the Yellow and Mauve lads to advance to the Grand finale of the 2020/2021 MTN FA Cup.

The home side paraded an unfamiliar starting line up with Goalkeeper Frank Boateng in goal with a defensive set up made up of Samuel Appiah, Fatawu Sulemana, former Hearts defender Vincent Atinga, and Ali Quattara.

in midfield Richard Boadu continues controlled affairs alongside Benjamin Arthur who joined from Shark during the second transfer window with Eric Kwakwa.

The rainbow boys on the other hand played a 4-1-4-1 formation with Richard Attah in post, Captain Fatawu Mohammed, Raddy Ovouka, Robert Addo and Mohammed Alhassan making up the defence. Former WAFA and Aduana star man, Caleb Amankwah played as the pivot with a complimentary efforts from Benjamin Afutu and Frederick Ansah Botchway in midfield, Isaac Mensah and Patrick Razak on the flanks and Daniel Afriyie Barnie leading the attack.

Medeama controlled the game making incursions early in the game. It took Hearts about 7 minutes to settle down and begin to share possession with Medeama. Their quick runs paid off in the 13th minute when Fatawu played Isaac Mensah through the right side of attack who sent in a cross that located Afutu’s head, beating Frank Boateng.

Samuel Boadu’s boys controlled the game, created some decent chances but couldn’t make anything out of it. Hearts’ combative midfield was too hot for Medeama to handle. Caleb Amankwah, who played what most fans think is his best game in Hearts of Oak shirt mesmerised the home side’s midfield and stopped most of their attacks.

In the 63rd minute, Frank Boateng failed to deal with a Patrick Razak’s misplaced pass intended for Isaac Mensah, gifting the phobians a very cheap and avoidable goal.

At this point, the Medeama team was down in spirit, leaving the phobians to enjoy themselves with the ball.

As they dominated midfield and continue to attack, the Medeama defence became prone to mistakes. One such attack saw Afriyie Barnie dribble pass the Medeama goalie and was brought down in the 18 prompting the center referee to award the phobians a penalty. The goalkeeper for Medeama saved the kick but the referee whistled for it to be retaken because Boateng was off his line before Barnie kicked the ball. Barnie found the back of the net in the second kick giving the Oak family a comfortable lead at the Cape Coast stadium.

It ended 3:0 in favour of Hearts giving them a ticket to the finals to be staged in Accra