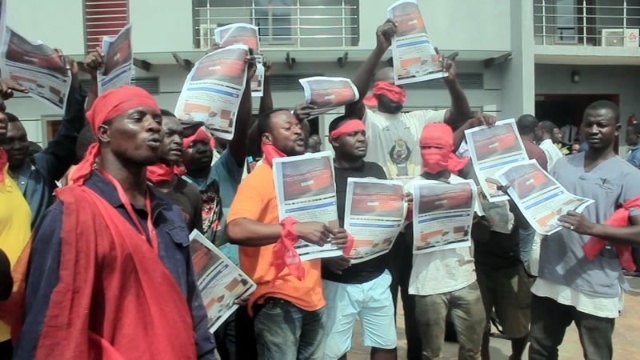 Foreigners engaged in illegal retail and other businesses in the Metropolis are still operating despite the Western Chapter of Ghana Union of Traders Association’s 24-hour ultimatum to voluntarily close their shops and subsequent threat of forcible closure.

On Friday, the regional chapter of GUTA, at a press briefing in Takoradi Market Circle,  warned foreigners engaging in illegal retail business, to cease operations, failing which their shops will be closed, have their wares seized or be arrested for possible prosecution. The presser followed a meeting between GUTA and a cross section of executives of foreign traders at the regional office on the same day.

Acting Chairman of GUTA Keneth Amponsah who addressed the presser said the group made it clear to their foreign counterparts, they would no longer tolerate their illegal retailing and other categories of businesses. GUTA warned them to cease operations within 24 hours or it’s special task force would forcibly close down all foreign retail shops, head potters and all other businesses owned by foreigners that are operating illegally.

”Over the past 20 years, GUTA has suffered the unwarranted encroachment of these foreign traders with impunity, strongly defying the tenets of this Act by their increasing activities in the market. Within this period, numerous meetings were held with the relevant government institution, we seem not to see any savior in sight.

”It is in view of this that we have taken it upon ourselves to enforce the law so effective tomorrow, all foreign retailers should close their shops voluntarily. If they fail to do so, our special task force will close the shops, where necessary, seize wares or effect arrests for possible prosecution” he stated.

However, 72 hours after the ultimatum, it appears the special task force failed to enforce compliance of the ‘directive’. Skyy News reporters were at Konkompe today and found out the special task force did not serve notice of closure to any of the foreigners believed to be illegally engaging in retail businesses there. As a result, most of the foreign spare part dealers were opened for business. Those who closed, Skyy News was told, had nothing to do with GUTA’s threats.

The situation was the same at Market Circle, the biggest shopping space in the Metropolis. It is not clear what may have accounted for this but Skyy News understands the leadership of GUTA will meet to, among a number of issues, get permission from the Regional Police Command – who had, till this point, only given verbal permission – the Ghana Immigration Service, and the Sekondi Takoradi Metropolitan Assembly.

We are looking forward to exploiting lithium deposit in…