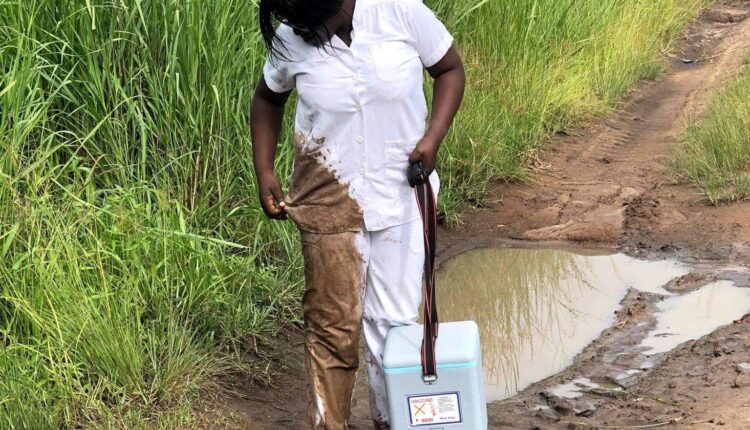 A Ghanaian midwife stationed at Akatsi North, in the Volta Region, was not in the best of mood after she fell from a motorbike on her way to deliver a pregnant woman in a village called Kpotavi, also in the Akatsi North District.

The midwife, narrating her ordeal to skyypowerfm.com indicated that, she was called by one of her pregnant client that was in labour, on her way to deliver her on a commercial motorbike that she hired, the bike skidded when they got on a muddy road which she fell, soiling her self.

She explained that, the rider managed to pull the motorbike out of the mud as they continued their journey to a successful delivery.

However, she indicated some the roads in the district are in a very bad state which most of the time, delays health care service to patients. This can lead to life threating situations and cause irreversible harm to patients due to delays in the service.

She pleads with the government to come to the aid of Akatsi North District, as the roads needs to be fixed, to aid health care in the district.

According to her post on social media, she asked one question, Is she to fix her self before the roads get fixed? which was in relation to the FixTheCountry campaign being countered with FixYourAttitude.

On my way to deliver an emergency health service. Mission accomplished. But because the road was fixed. I fixed myself too. 😭😭😭😭😭😭😭😭😭😭😭😭.