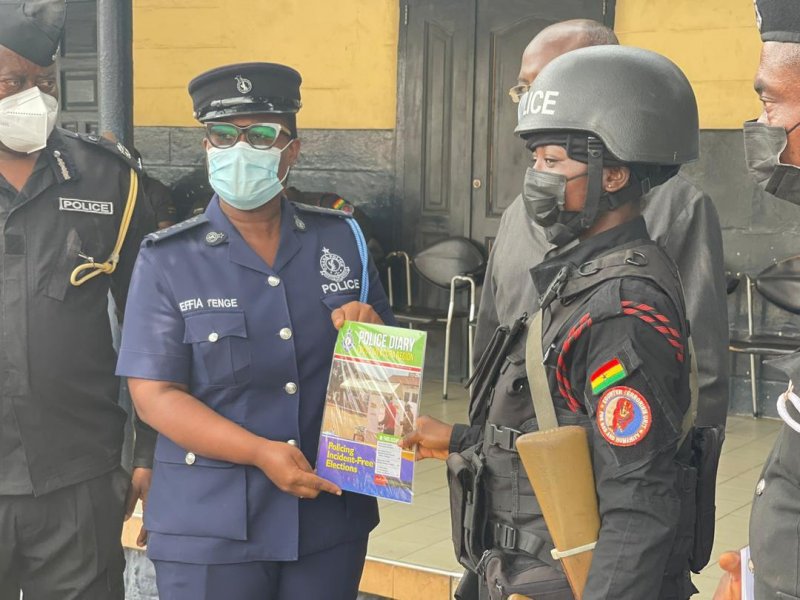 The Melcom Group of Companies has honoured Constable Christiana Sarfowaa of the Regional Counter Terrorism Unit (CTU) of the Ghana Police Service, for her nomination as the ‘City Police’ of the third edition of the Police Diary.
The ‘City Police’ is a Column in the Police Diary series, dedicated to hardworking personnel, whose services to duty is undoubtedly outstanding.
In a citation read in honour of the nominee, Constable Safowaa, she was described as a dedicated officer who worked in a male-dominated field, Counter Terrorism Unit (CTU), with passion and diligence.
She was said to be performing high-risk security duties such as protection of high-profile personalities and foreign dignitaries, state and counter-insurgency operations.
Presenting the award to the recipient, the Director of Communications for Melcom Group (sponsors of the award), Mr Godwin Avenorgbor, commended Constable Safowaa for exemplifying herself amongst her male counterparts and said, prioritising police welfare in the corporate social space of Melcom Care Foundation, was dear to the Group.
The Regional Operations Commander, Assistant Commissioner of Police (ACP), Mr. Kwesi Ofori, who graced the occasion, congratulated Constable Safowaa for her hard work and challenged her to strive for unexplored opportunities offered by the Service.
The Head of Public Affairs Unit, DSP/Mrs. Effia Tenge, who initiated the project, expressed appreciation to the Melcom Group, for partnering the ‘Officer Recognition Concept,’ saying, “as leaders, we don’t need much to motivate team players who drive creditable changes; sometimes, just a pat on the shoulder, and words like ‘well done’ can stimulate high energies for excellence.”
Constable Safoawaa was given a voucher to shop at any Melcom outlet in the country.