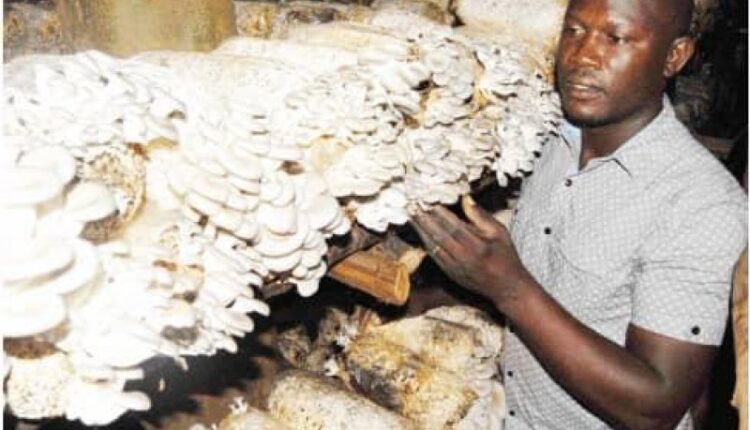 Meet the twins nourishing Ghanaian diets with mushroom and snails

Mr. Kofi Yeboah and Ms Afua Yeboah are 38-year-old twins engaged in commercial production of oyster mushrooms and snails at Fosu in the Assin Central Municipality of the Central Region.

Having stayed at home for nearly a year without jobs after completing University in 2016, the two ventured into large scale maize farming as a means of economic survival but were unsuccessful. The rampaging fall army worms destroyed a huge portion of their maize farm, while the rest was sold cheap due to marketing and storage challenges.

They lost over GH¢ 1,000.00 of their life savings invested in their farm businesses.

The disappointed farmers decided to venture into a more profitable but less capital intensive business. Eventually, they shifted production to mushroom and snails farming, using biotechnology.

Biotechnology is the exploitation of biological processes for industrial and other purposes, especially the genetic manipulation of microorganisms for the production of antibiotics, hormones among others.

In an interview with the Ghana News Agency (GNA), Mr. Yeboah, the elder of the twins, narrated how they were motivated to venture into mushroom and snail farming due to its huge economic potential, while providing nutritious balanced meal to families.

They were also inspired by the need to care for the environment by making good use of the sawdust generated at sawmills for the production of one of the world’s richest protein foods, mushroom.

Mushrooms and snails are special delicacies of many Ghanaians who have ever growing appetite for them. The two, have nutritious contents with shells of snails used as decorative objects and incorporated into jewellery production among others.

Snail is a major source of protein in diets, with a wide range of extraordinary health benefits. Its nutrients boost the production of Vitamin D which enhances the immune system and aids weight loss.

There are many other species of mushroom in the country which grow in the wild. They are collected by both the young and old and sold mostly along the roadside and markets. Probably, the most preferred mushroom in Ghana is the one that grows from decaying palm trees known as ‘domo’ or ‘Apu’ in the Akan language.

However, until recently, the two nutritious edibles were seasonal.

Mr Yeboah said in Ghana, sawdust is treated as a waste product of wood processing. But with the application of simple technology, this end product, otherwise regarded as useless is used to grow mushrooms, with high socio-economic benefits.

He explained that by simply applying a technique called ’tissue culture’, certain parts of the mushroom is placed on microbiological media and then on cereal grains. This enables the mycelium of the mushroom to grow and continues the cycle to ensure all year production.

“In the production of mushrooms, we do not use inorganic additives, it is all organic. We just use agricultural waste, like saw dust, rice straw, plantain leaves, which can be modified – treated such that the mushrooms can grow on it,” Mr Yeboah revealed.

According to him, any substrate can be used to grow mushrooms but, the suitability of the substrate must be determined to ensure that the species of wood is not toxic. That’s because mushrooms tend to pick up some nutrients from where they are found, therefore, he said it is important to give the required nutrients in order that they can grow into nutritious food.

Currently, the twins produce baskets of oyster mushroom from three giant production sites sitting on a one acre land. With an initial production of 10 bags containing sawdust mixed with rice bran and quicklime in sacks, they have expanded to 1,853 bags per month and still growing.

On the snail farm, Mr Yeboah said snails are not difficult to raise and manage because they feed on kitchen leftovers and leafy greens from the field.

The snail farm is relatively small but well designed to disallow predators from attacking the snails. While snails can live up to 10 years in their natural habitat, it only takes two to three months before young embryonic snails are ready for sale to the market. That means it is only a short time before the farmers begin to see a return on their investment.

Mr Yeboah expressed joy about their new business saying “patronage is very good. Sometimes we are unable meet the demands of our customers and we have started expanding the snail farm to reach out to the local and international markets.”

They are waiting to sell their third batch of snails totalling over 18,000 to the local and international markets.

Snails are a delicacy in the US and in some parts of Europe and have long been a staple of the traditional diet in Africa and Ghana. They are used for soups, stew, khebabs and in other cuisines with Ghanaians consuming some 33 million pounds of snails per year, but demand far outweighs local supply, hence “we are here to fill the gap to support ourselves.

He stated that snails are not difficult to raise and manage because they feed on kitchen leftovers and leafy greens from the field. The challenge, however, is how to keep the environment in the pens cool and clean to prevent insect-borne diseases.

The commercialization of the mushrooms and snails according to Mr Yeboah, had increased the appetite of Ghanaians due to their health benefits.

Mushrooms are also a healthier food choice than meat – they have antioxidants and low cholesterol.

He confirmed to having earned well in mushroom and snails business, adding that “we are happy to be mushroom King and Queen in our community. We have become popular and more respected among our peers”.

Considering the value chain for oyster mushroom production, every step can become a source for employment. People could supply sawdust to mushroom farmers and get some income.

According to him, many people had shown high interest in the business, with over 10 people being trained within less than a year on his farm. Mr Yeboah insisted that he trained people who genuinely have interest in mushroom and snail cultivation, on one-on-one basis and not in groups.

This is to ensure such people practiced the knowledge acquired in the cultivation of mushrooms as well as snails after their training.

“We believe growing this on a commercial basis has given more Ghanaians the opportunity to taste more of mushroom or see more of mushrooms. People are becoming aware of eating healthy and mushrooms play critical role when it comes to putting good food into our bodies, to curtail lifestyle diseases which have escalated in recent times,” he explained.

It is an exciting time for the mushroom and snails industry as the demand continues to grow and the market picks up.

According to Mr Yeboah, very often, access to land is very difficult in the urban centres, so if one wants to do large-scale agribusiness, it must be done outside the community. But then the market demand is in the cities, so the cost of transportation makes the price very high.

But with oyster mushroom production for instance, it can be grown in bags, so one needs only a humid environment in which mushrooms can germinate.

What’s more, the road network is very bad, and sometimes blocked entirely from the urban market, where higher prices for the products are. Also they lamented about the high cost of labour which is without advanced technologies for transplanting, weeding and harvesting.

ADVICE TO THE YOUTH

Despite the remarkable improvement over the years on his farm, Mr Yeboah said more is being done to achieve excellence. He said in the country’s quest to address its employment challenges for the teeming youth, mushroom production should be properly harnessed to be an employment avenue.

He said his agribusiness revolution is a testimony to the youth and leadership that with commitment and support, the youth have the potential to shake up the status quo with sustainable agribusiness.

Also, he encouraged his peers to take up the trade and emphasised that oyster mushrooms business is great for people in the cities and entrepreneurs to monetize industrial waste.

“Farmers can generate extra incomes if they are taught simple technologies in mushroom production,” he added.