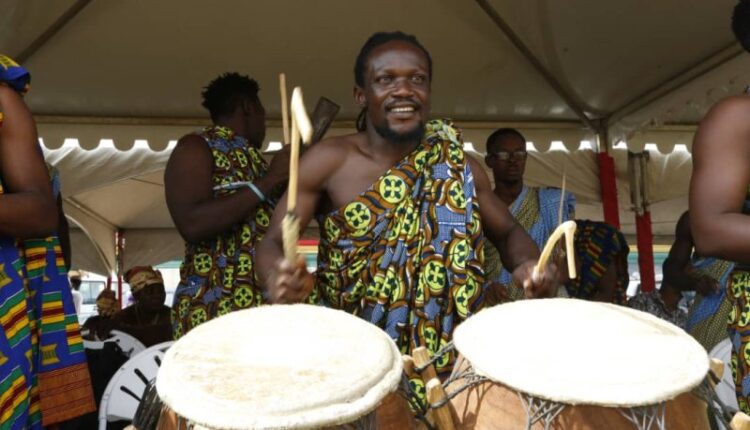 The 37th Edition of the National Farmers Day celebration has begun amidst a masterpiece of unique Ghanaian culture, arts and tradition at the Adisadel College Park in Cape Coast.

The five-day event, being climaxed with a grand durbar on Friday, started with an Agricultural Fair and Trade Exhibition on Monday, November 29, with all 16 regions participating.

It is on the theme: “Planting for Food and Jobs: Consolidating Food Systems in Ghana,” at which the country’s gallant farmers and fishers would be rewarded for their hard work.

Prior to Friday’s celebration, various regions mounted exhibitions and showcased their agricultural potentials, alongside displaying their rich culture and food produce peculiar to each region.

Surfice it to say that at the height of the colourful programme is a sea of revellers from all walks of life who trooped to the durbar grounds to witness the custom and traditions of the regions.

The chiefs and queenmothers are well represented, beautifully adorned in their traditional clothes and regalia as they danced to the refreshing traditional music.

Players in the arts industry also graced the occasion including the performing and visual artistes, film makers, designers and allied industry players.

As it is to be expected the early hours of the morning saw heavy vehicular traffic on all major streets in the ancient city, particularly from the Cape Cast-Takoradi Highway, and Kingsway-Abura roads.

Security officers have been placed at vantage locations to direct the traffic flow and maintain law and order.

Mrs Mavis Hawa Koomson, the Minister of Fisheries and Aquaculture Development, during the exhibition declared zero tolerance for Illegal, Unreported and Unregulated (IUU) fishing practices depleting the marine resources and assured of her commitment to reversing the trend.

They were supplied with 5,000 cockerels and 1,000 piglets at subsidised prices for breeding as part of the Ministry of Food and Agriculture’s Rearing for Food and Jobs programme.