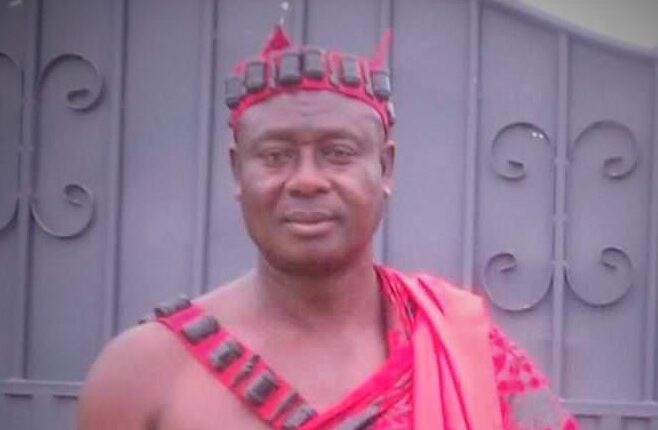 Reports that Mr Christopher Ekow Clarke, Tufuhen of Akwakrom, a Mankessim neighbourhood, who was reportedly engaged in the murder of a potential student nurse at Mankessim, had passed away have been refuted by the police.

False, according to a media source, is the claim that the chief detained in connection with the murder of a potential student nurse at Mankessim has passed away.

According to a police news release, the chief and his accomplice were still alive and held in police custody after being ordered by the court to appear in court again on October 4, 2022.

Therefore, the Police pleaded with the general public to consider the report with the disrespect it merited.

In connection with the murder of Georgina Asor Botchwey, a 25-year-old nurse trainee at Mankessim in the Central Region, the Cape Coast District Court on Thursday remanded two suspects.

Michael Darko, 48, a self-described pastor, and Christopher Ekow Clarke Quansah, 65, Tufohen of the Mankessim Traditional Area, were accused of plotting to commit murder and murder.

Darko allegedly confessed to the crime during a police interview and claimed they intended to use the deceased for money rituals.

The accused persons, who failed to enter a plea during their initial appearance before the court presided over by Mrs. Bernice Mensimah Ackon, are scheduled to return on Tuesday, October 4, 2022.

According to the prosecutor, DSP Daniel Gadzo, the complainant, Mr. Duodu, a military officer assigned to Takoradi, was the deceased’s brother.

He claimed that Quansah lived in Sikafoambantem in Mankessim and that Darko, who lived in Kumasi, was the deceased’s sister’s boyfriend.

Georgina, a student applicant who had traveled from Yeji in the Bono East Region for an interview at the Ankaful Psychiatric Nursing Training School in Cape Coast, called Darko to let him know she was in the area on Thursday, September 8.

On Friday, September 9, 2022, he said Darko had offered to pick her up after the interview.

As promised, the two defendants transported Georgina to Pedu in Cape Coast by taxi after picking her up from Ankaful.

After taking Georgina’s iPhone and confining her in a room, Quansah and Darko left for Sikafoambantem, a neighborhood of Mankessim, where they excavated a hole in an unfinished storey structure.

Later, they brought the woman to the unfinished structure where Quansah struck her in the neck with a club from behind as Darko held her till she passed away.

She was then given a hair cut before being buried in the pit.

According to reports, the Central Regional Police Command obtained information that resulted in Darko’s arrest at

Quansah was also apprehended from his hiding place on Wednesday, September 21 as a result of a tip.

According to DSP Gadzo, inquiries were still being conducted.