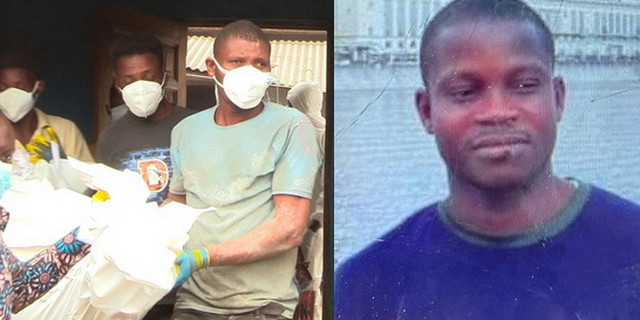 35-year-old suspect, Benjamin Kofi Yeboah has killed and secretly buried his 86-year-old mother at Ayigbe Town, Dome Kwabenya in Accra. He was arrested on Friday, June 5 by the Ghana Police.

Reports stated that the suspect, Benjamin Kofi Yeboah has been living with his mother for a while before the incident occurred. A resident said, ‘’ Madam Mansa has been missing from home for sometime and anytime we ask his son, Benjamin her whereabout, he tells us Mansa has travelled to Aflao in the Volta Region.’’

Stephen Dollah, the elder son of Madam Mansa visited the house and reported to the police what he supposed to be a grave. The police obtained a court order to dig the grave and it turned out to be the decomposing body of Madam Mansa.

A resident who identified the suspect raised an alarm and soon, the man was surrounded by the neighbours who were angry and ready to administer instant justice on him but the timely intervention of the assembly man for Ayigbe Town, Ebenezer Kwao, saved the suspect.

Benjamin was later picked by the police minutes after the disinterment of his mother’s body, Madam Abraa Mansa, whom he had supposedly buried in a shallow dugout with her head down and legs up.

An eyewitness explained the grave was so shallow that, the sand had been spread over the legs to conceal them.
The National Disaster Management Organization, the Municipal Health Authorities and the police exhumed the body of the old woman.