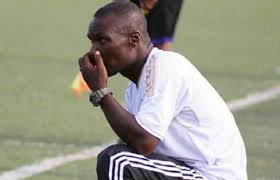 Hearts Of Oak’s interim coach Edward Nii Odoom says he wants to be given the role of a substantive head coach of the club.

Edward Nii Odoom is currently serving as interim coach following the club’s decision to sack Kim Grant who served as the head coach and technical director.

In the first game of his second stint as interim coach, Edward Odoom’s Hearts side suffered their second defeat of the season as a Prince Opoku Agyemang’s brace and a third from Nana Kofi Babel condemned them to a 3-0 loss to Medeama in Tarkwa.

Speaking to journalists in the post match presser, Edward Odoom parried questions about his suitability to the role.

”I have coached in Ghana for 30 years. I have handled different teams like Real Sportive and many others.

This Hearts of Oak job is not beyond me at all. I am capable of doing the work well.”

When asked if he wanted the job long term and to be clear, in a substantive capacity, Nii Odoom said yes.

”I want the job (on a) full time but we have to beef up the squad”.

He is expected to remain in charge when Hearts take on Ebusua Dwarfs on Sunday at the  Accra Sports Stadium.