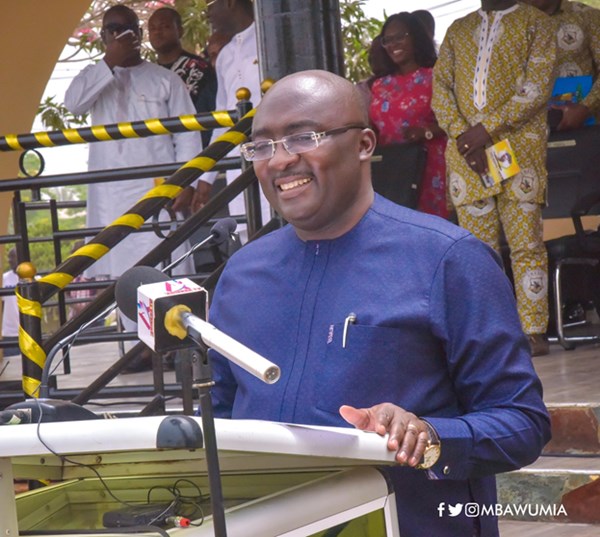 The Vice President of Ghana, Alhaji Dr. Mahamudu Bawumia has taken a swipe at the flagbearer for the National Democratic Congress (NDC) John Dramani Mahama for calling out to Ghanaians to vote for his party to provide equal opportunities for all. Recounting the sour experiences Ghanaians had during Mahama’s administration, the Vice President said it’s better Ghanaians respond with a definite “no, to Mahama’s Nkonfem government.” According to him, the previous administration; both Prof Mills and John Mahama failed in their bid to provide equal opportunities for the people, arguing that they exploited the state’s resources to their own advantage. He indicated that SADA corruption scandal, which ended up with ‘nkonfem [thus guinea fowls] flying out into neighbouring Burkina Faso without a trace’ is their hallmark.

John Mahama at the Professionals Dialogue organized by the Centre for Social Justice promised to award Ghanaians, equal opportunities when he’s voted into office. This had provoked Dr. Bawumia to vent his anger, as he reminds the public of the past terrible experiences under John Mahama.

Speaking at Kpong during his Eastern Region Tour, Dr. Bawumia questioned if the former President is being sincere with his promises. He argued that the NDC’s offer would rather send the country into another discomfort and hardship.

He stressed that the test of credibility and honesty in delivering on promises lies with the New Patriotic Party, and President Nana Addo Dankwa Akufo-Addo. He mentioned that his government has provided more and better opportunities for all than any other.

He concluded that a vote for President Akufo-Addo will guarantee the future for today and tomorrow’s generation.