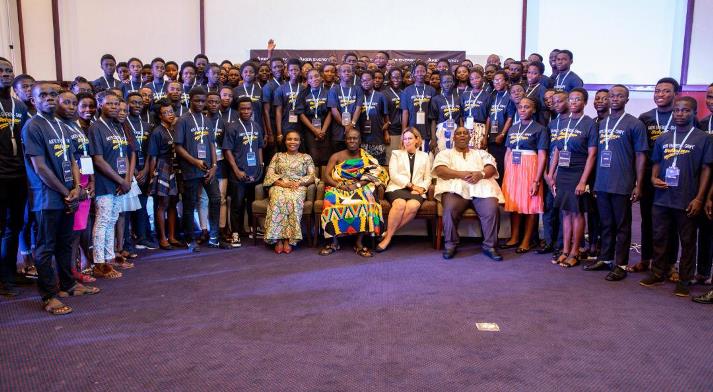 The Deputy Western Regional Minister, Madam Gify Eugenia Kusi has applauded Aker Energy for its exemplary initiatives in community development, and has thus urged all companies in Western Region, and in Ghana as a whole, to emulate the philanthropic course started by Aker Energy.

She said the company’s scholarship scheme it runs in partnership with GNPC; Aker Enrgy-GNPC Scholarship, is one that is affording people the opportunity to have SHS education, which hitherto, would have been difficult for them to get.

“Thank you Aker energy-GNPC. As I speak now the Western region contributes 60% of the nation’s resources. If all institutions train 125 students, I am sure in the next future, everyone in the Western region will be a scholar. I implore every company and those who are listening to this will emulate what Aker Energy and GNPC are doing,” she stated.

Madam Gifty Kusi said this at a short ceremony held  today, 16th August, 2019, at the Atlantic Hotel, Takoradi, to celebrate this year’s graduating class of beneficiaries from the Aker Energy-GNPC scholarship, who, according to Authorities, have performed brilliantly.

She urged them to be proud of themselves for the stellar performances they have chalked due to the support they got from the scholarship programme.

“It is a pleasure to invite me to help celebrate our future scholars. These results were achieved due to someone’s benevolence. You should be proud of yourself as a student, as a parent and as a good corporate body, Aker Energy and GNPC. As we put in community social responsibility this month, Ghanaians are given aids and are going to school,” Madam Kusi intimated.

The External Relations Manager of GNPC, Carmen Bruce Annan admonished the beneficiaries to take the opportunity of having their education supported by the Aker-Energy and GPNC serious, and aspire for greatness.

“I’m sure you have heard many times that education is the bedrock of every society and without education as an individual it is very difficult to get far as you can to realize your full potentials. Most importantly without education our national development as a country will be very difficult to attain. So, programs like these are very important. We heard Joseph’s [beneficiary] example that if it had not been for the AKER-GNPC Scholars Program fishing was probable going to be his vocation.”

Speaking to Skyy News’ Jessica Afful Tuleassi at the sidelines of the ceremony, some beneficiaries of the Aker Energy-GNPC Scholarship Programme revealed that but for this scholarship, the possibility of getting Senior High School education would have been very bleak.

Christine Ofori, a beneficiary of the Aker Energy-GNPC Scholarship acknowledged the entities for the immense role they have played in making sure she completed Senior High School. According to her, without the help of the two entities, she could never have gotten to that level of education.

“I have really benefited a lot from the Aker Energy- GNPC scholarship. After JHS, my results came out and I had grade 12. I realized I had done well but the question I asked myself was that; after here where am I going to? But Aker Energy stepped in to help with my tuition, and everything. They were my hope. All I say is that I thank them for the opportunity given me. I will tell all those out there who have given up, that all hope is not lost and so far as they have the dream to guide them, if they study, they will be able to get there,” she told our reporter.

Another scholar, Andy Ashey, said without the scholarship, he would not have figured out how his dreams were going to be actualized, considering the serious financial difficulties he had to go through to complete Junior High School.

“Aker Energy- GNPC scholarship has been very helpful. They have made my dreams come through because I never thought I will be able to complete Senior High School. Starting from JHS, I have encountered series of financial constraints and even dropped out of school. My grandmother tried her best to put me through education. After B.E.C.E, my results were good and I applied for Aker Energy-GNPC scholarship and they were able to sponsor me through my secondary school level,” he said.

Master Ashey revealed that the scholarship gave him other opportunities than just formal education, adding that there are places he has been to, through the Aker Energy-GNPC Scholarship, that he could only dream off previously.

“Through them, I have been able to go to places I never thought of going. It would have been only in my dreams that I will see those places. With this opportunity, I have met a lot of people. The way forward, I have been assured that they will help me through my tertiary education and I’m very grateful for that,” a jubilant Ashey told Skyy News’ Jessica Afful Tuleassi.

Andy Ashey advised young people who aspire to reach the highest level of education to apply for the scholarship scheme, and not despair due to financial pressures.

“For those out there, there are a lot of opportunities. At first, it was financial constraint that pulled many people out of school, but now there is the opportunity to apply for Aker Energy for their dreams to become a reality as long as they are in the coastal region. I believe that if they apply and put in hard work, their results will testify their greatness in the future,” he told Skyy News.