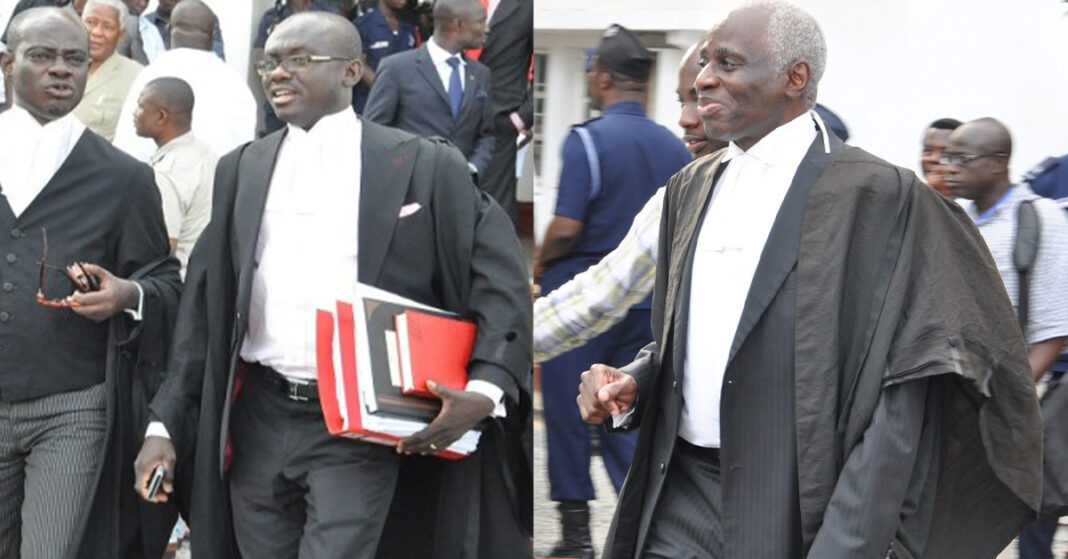 A private legal practitioner, Lawyer Akwasi Boateng has shared insight on the landmark Hohoe Constituency case battled out at the Supreme Court between Deputy Attorney General, Godfred Dame and a member of the NDC’s legal team, Lawyer Tsatsu Tsikata.

Lawyer Akwasi Boateng in an interview with Samuel Kojo Brace on Skyy Power FM’s Jolly Breakfast Show indicated that the Supreme Court panel of judges have now given the Ho High court the mandate to hear the human right aspect of the case, and leave out the election petition as spelled out in article 33.

He indicates that the panel of Judges clearly indicated that the Ho High Court has no mandate to stop Mr. Peter Amewu from being sworn in as the Member of Parliament for Hohoe because he has committed no fault.

Background to the case

It was an interesting day at the Supreme Court between Deputy Attorney General Godfred Yeboah Dame, and a leading legal team member of the NDC, lawyer Tsatsu Tsikata.

The Supreme Court panel of judges brought finality to the case on Tuesday, January 5, 2021. The judgment has left many Ghanaians talking on all platforms about how Godfred Yeboah Dame was able to floor Tsatsu Tsikata.

Mr. Tsatu Tsikata had applied for an ex-parte injunction at the Ho high Court to prevent Mr. John Peter Amewu from holding himself as the Member of Parliament for the people of Hohoe Constituency.

He also urged the court to stop him (Peter Amewu) from presenting himself to be sworn in as part of the law-making house.

Tsatsu Tsikata’s argument was on the basis that, some constituents who were formerly members of the Hohoe Constituency were not allowed to exercise their voting right in the just ended parliamentary election.

These electorates, according to Lawyer Tsatsu Tsikata’s argument were from communities such as Lipke Bakwa, Akpafu Mempeasem, Santkrofi, Benua, Likpe Mate, Lolobi Kumasi, and Lolobi Hunyeasem.

At the end of the hearing, the Ho high court sustained the plea of Tatsu Tsikata and granted the injunction on Mr. Peter Amewu through the basis of a human right application under article 33(1).

Defense to the case at the Supreme Court

The Deputy Attorney General, Godfred Yeboah Dame applied under the prerogative writ of CERTIORARI, (to issue to quash), and argued that Peter John Amewu must continue to hold himself as the Member of Parliament for the Hohoe Constituency because the Ho High has no jurisdiction to hear the case.

He further argued that the application was wrongfully filed.

He also cited articles 47 1 and 2 to indicate that a constituency cannot operate under two separate regions, and therefore the said towns where the constituents hail from now falls under the Oti Region even though they were initially under the Hohoe Constituency.

He, therefore, prayed the Supreme Court to quash the decision of Ho High court.

After hearing the argument of both lawyers, the court unanimously agreed with the Attorney General that the plaintiffs should have come as an election petition and that the towns mentioned are not in the Volta Region.

They added that Mr. Peter Amewu cannot be made to suffer injunction over the matter.

Breaking: hundreds of passengers stranded in Tarkwa as drivers refuse to...