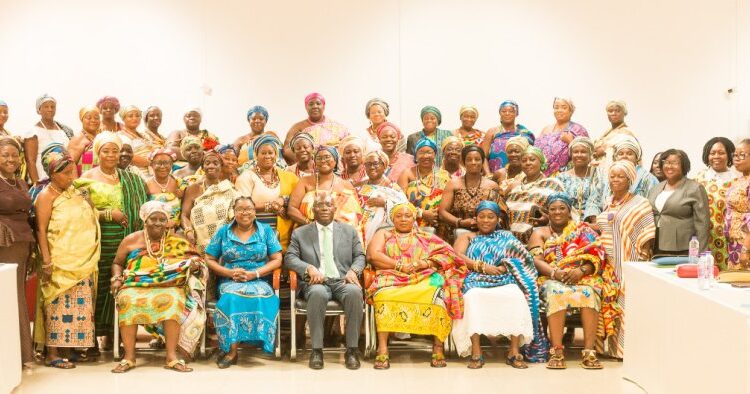 The Lands Commission has sensitised members of the Queen Mothers Platform Association, comprising queen mothers in the various traditional areas of the Greater Accra Region, on the Land Act, (Act 1036).

At a sensitisation workshop for the queen mothers in Accra, Madam Cynthia Odamtey, the Head of Policy Planning and Research of the Commission, said it formed part of the continuous efforts to ensure that all key stakeholders were adequately sensitised on their roles and responsibilities under the new Land Act.

She expressed the belief that the engagement would help shape land administration in Ghana.

Madam Yvonne Sowah, the Chairperson of the Greater Accra Regional Lands Commission, said the Commission acknowledged the important role queen mothers played in land administration and commended the Association for availing itself for the sensitisation.

She said it would help the members to understand the laws governing land administration in the country and contribute to positive land management.

The new law was passed in 2020 after extensive consultations with key stakeholders.

It has created a Customary Land Secretariat, which would ensure accountability and transparency in the management of lands in various traditional areas.

“The role of women as the principal supporters of our chiefs and family heads makes it inevitable to understand the provisions of the Act,” Madam Sowah said.

“The ground rent from leases granted to the various persons should be a source of revenue for the traditional areas and this should be done through a well established Secretariat, with up-to-date records.”

She urged queen mothers to take up professional courses such as Surveying, Land Administration
and legal courses to enrich their knowledge to help manage the Secretariat.

Madam Sowah highlighted some relevant sections of the law, including the implication of instigating “landguardism” and the consequences of serving a jail term from five to 15 years.

She urged allodial interest holders to register their land before selling them as well as ensuring it was properly planned for effective management.

Mr James Dadson, the Acting Executive Secretary of the Commission, presented a comprehensive overview of the Act.

The Commission donated 40 copies of the Act to the Association and urged members to keep abreast of the new legislation.

Nana Amponsah Dokua III, the President of Queen Mothers Platform Association, expressed gratitude to the Commission for the exposure and believed it would help them to provide the best advice on lands in their respective traditional areas.