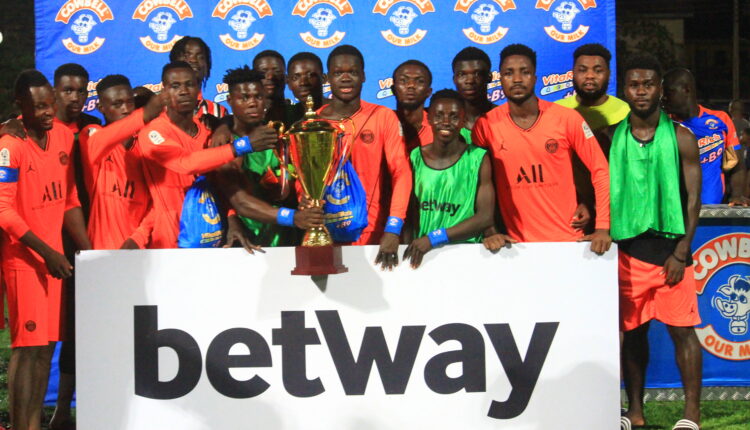 The Video Assistant Referee (VAR) saved the grand final of the Community Soccer Festival on Sunday, April 17 after it was consulted for some crucial decisions.

Assemansudo won the bronze (3rd place) after defeating Assafo 4:2 on penalties after a 1:1 draw at full time.

Kweikumah took a deserving lead in the mid of the first half after defending against sustained attacks from team Adiembra.

Team Kweikumah did not conceive a goal in opening play throughout the competition. They held on till the 90th minute when their defender in a penalty melee handled the ball.

The shout for a penalty was loudest from the Adiembra teaming supporters. The referee for the day, Jacob Wormegah did the wisest thing, to consult VAR.

As you would expect, the entire Kweikumah and Adiembra team went with him to see things “feeli feeli.”

All we saw was the Adiembra captain jumping up and down in celebration. The Ref after a few seconds pointed to the spot for a penalty in favour of Adiembra.

Nobody protested at this stage – Thank God for VAR. And guess what, Adiembra shot the penalty over the bar, handing the giant Skyy@25 Yesu Asor 2022 Trophy to jubilant team Kweikumah.

It was a befitting climax of two days Community Soccer Festival full of talents and drama. The stage is set for another thriller next year, all things being equal.

This program was made possible in kind courtesy of Betway, Cowbell and Schweppes.