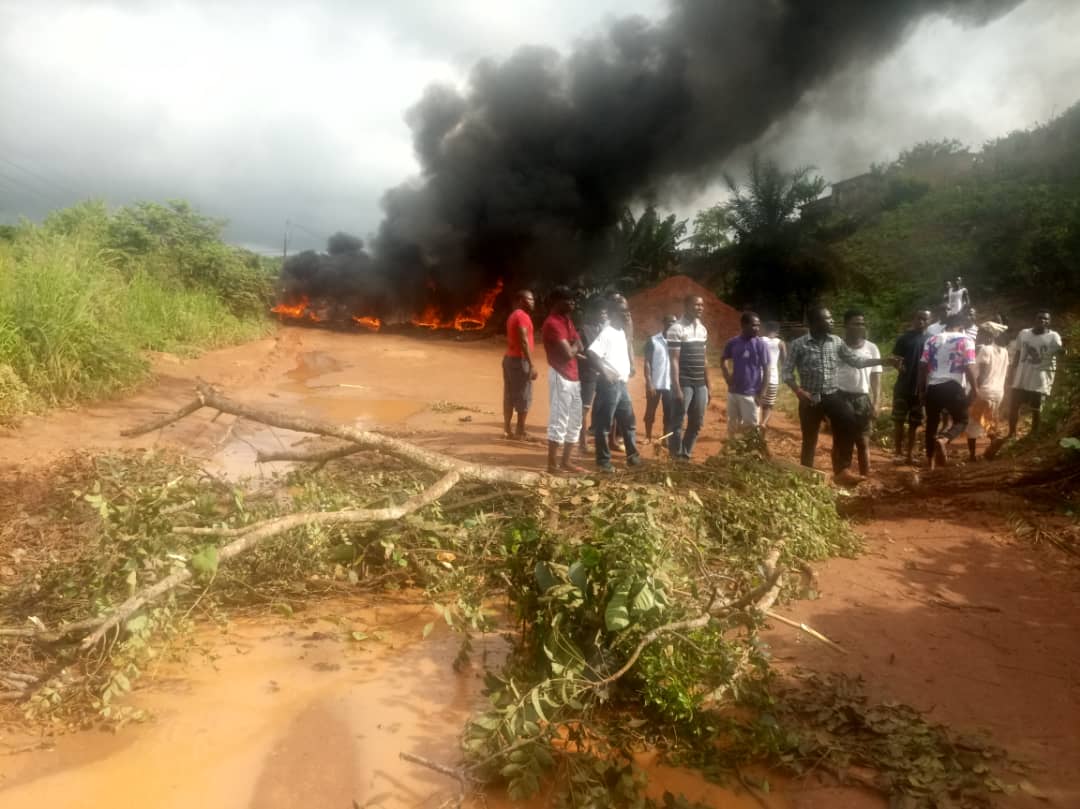 Residents of Inchaban Nkwanta, a suburb of Kojokrom in the Sekondi-Takroadi Metropolis, have blocked the Eshiem road, the main road that links the Metropolis to the Mpohor District, in protest of the bad nature of the road. Inchaban Junction serves as a link to the Eshiem industrial enclave, which host a number of local and multinational companies.

Residents, totaling over 200 in number, this morning, burnt car tyres in the middle of the road, and used logs to block it, and essentially prevented cars from moving. The about ten (10) police personnel who were present at the scene could not prevent the residents from carrying through with their action.

“The police can do their worse because we are prepared for whatever they want to do. Nobody is coward the fact that you have respect for authorities does not mean you are coward. We have told the police they can do their worse, pepper spray, tear gas, hot water we are ready for them but for them to negotiate their way we are not going to agree.” One of the resident told us. 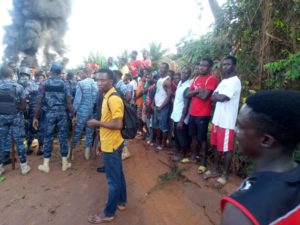 In an exclusive interview with Skyy News, some of the residents said their major disappointment is the failure of companies within the industrial enclave to consider reconstructing the road as part of their corporate social responsibility. Companies that operate on the road include Dangote Cement, a subsidiary of Dangote Industries Limited, which is presently constructing a cement processing factory within the area, Wankang Tyles Manufacturing Company, PLOT, a cocoa processing company,  and Amandi Construction Limited. The residents lamented that all these organisations have seemingly turned a blind eye to the bad nature of the road.

According to the residents, their persistent pleas for the road to be fixed had fallen on deaf ears, forcing them to resort to the protest. They say discussions with the Head of Urban Roads at the Sekondi Takoradi Metropolitan Assembly, Ing. Mike Dzisi as well as the Metropolitan Chief Executive, Anthony K.K. Sam, had all been fruitless.

“All the taxi drivers have agreed not to work, you spoke to the GPRTU man they have all agreed not to work. Because buying spare parts is expensive you buy  spare parts a week or two your car break down so we are pleading with them they should come and fix the road for us. This is not the first time we are demonstrating; this is not the second. This is the third time,” a resident lamented. 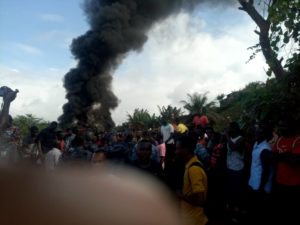 Reacting to the concerns raised on the Jolly Breakfast Show (JBS) on Skyy Power FM, Ing. Mike Dzisi, Head of the Urban Roads Departmenty of the STMA, while assuring residents that their complaints have not fallen on deaf ears, called on the companies within the enclave to come to the aid of the community by helping to fix the dilapidated road. He added that a meeting had been scheduled between the Assembly and the companies in the area, at 10 am today, to deliberate on fixing the road. 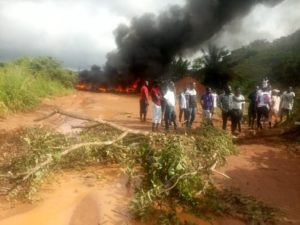