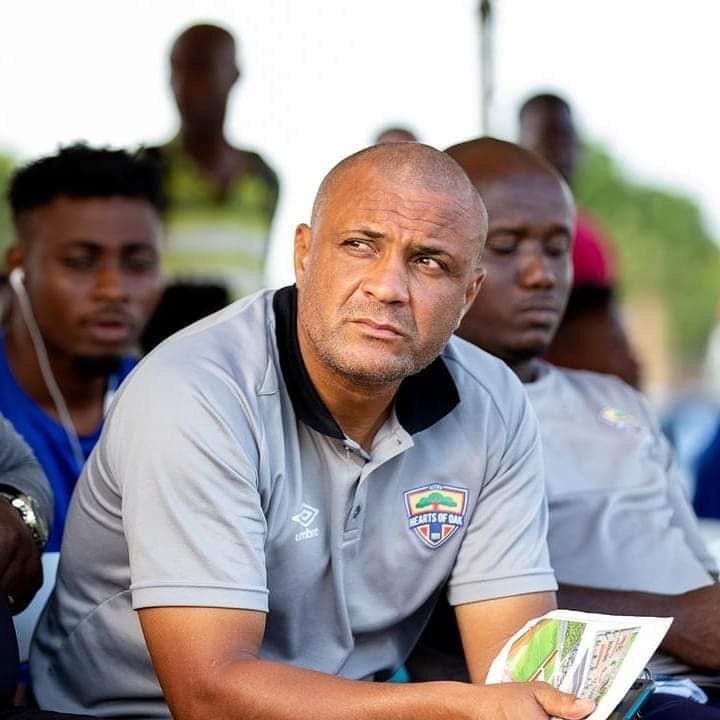 Kim Grant: A man under pressure even before a ball was kicked.

On Sunday, Hearts of Oak suffered a 1-0 defeat to Berekum Chelsea. In typical fashion, fans have blamed Kim Grant for what was, in truth, an insipid performance. Chief Executive Officer (CEO) Frederic Moore has not been spared. The club’s board chairman and majority shareholder, Togbe Afede XIV has not escaped blame too. Normal. Win or lose, fans will complain. If it is not about the quality of performances, it is about fan favorites who are not getting game time. So when they do after results like this, it is difficult to place any value on it.

But how much of this is just regular fan scapegoating? Are there any issues for Mr. Grant to lose sleep over? I’m afraid yes, and there are a lot of them.

The embarrassing UEFA License A saga.

In October last year, Kim Grant’s reign as technical head began, and with it, a series of mistakes that would weaken his position at the club. During his interview, Grant informed then CEO Mark Noonan he was a UEFA License B holder. Problem was that Noonan wanted a UEFA License A holder. When Noonan made this clear, Grant said it would not be a problem because he had enrolled in a UEFA sanctioned course for the upgrade and so the License A certificate would be ready in a month; November 2018. To play safe, Noonan insisted on a clause that would allow them to terminate the appointment if any of the information on Grant’s resume had later turned out to be false. Grant agreed.

November 2018. No show. December 2018. No show. Around the same time, Noonan resigned his role as CEO. Three months later, Frederick Moore took his place. Still, Grant could not provide the certificate.  When Hearts probed, Grant allegedly presented a text message that said the certificate would be ready in a month. That message would later be revealed to have been sent from his wife. Yes. His wife!

In a move to avoid public humiliation, Hearts readied to sack Kim Grant and install Edward Odoom as interim coach. However, the club’s former coach and the Ghana Football Association’s Head of Technical Directorate, Francis Oti Akenteng, had intervened and asked Grant to present his case to the GFA’s Club Licensing Board. Grant did and was issued a conditional approval to coach Hearts of Oak.

The ‘resolution’ did little to quell reports of Grant’s sacking. By Friday, word had gotten to town that David Duncan was set to make a remarkable return to replace him.

Club sources have denied agreeing a deal with Duncan. However, there was mention of meeting that took place eight months ago, between David Duncan and Togbe Afede. A meeting Duncan categorically denied, in a conversation with me today. He however confirmed there were no outstanding issues between himself and the club.

So while, the club may not have agreed a deal with Duncan, there is nothing that could prevent a reunion, should the putrefaction continue.

Grant’s insistence on youth over everything else in recruitment.

In the 14 months he’s been in charge, Grant has rejected the opportunity to sign Justice Blay, Kelvin Andoh, Emmanuel Ocran, Akwasi Donsu and Parick Razak. Yes Patrick Razak. Why? They are too old.

In January 2019, Medeama S.C, in keeping with their policy of giving prominence to a youthful talented core that would be less expensive to maintain, were ready to do business over Justice Blay, Akwasi Donsu, Rashid Nortey and Ibrahim Moro. Akwasi Donsu and Ibrahim Moro found their way to the Colorado Springs Switchbacks in separate loan deals. Try as they did, Medeama could not sell Justice Blay. A contact was then made through an intermediary to Hearts of Oak. As head of the technical department, Grant was to have the final word. His response? Too old. Yep.

Around that same time, Grant refused to have Kelvin Andoh trial at the club. Long story short, Justice Blay and Andoh both ended up at Kotoko.

Akwasi Donsu. At the expiration of his loan move, he sounded out a desire to play for Hearts of Oak. A contact was made and on the day he got to the Kotoka International Airport from the U.S in November, my source at the club was there to pick him up. From the airport, they drove straight to West Hills Mall for a meeting with Kim Grant. While he did not immediately say no, he did eventually.

On Sunday, while Hearts were being listless, Emmanuel Ocran was being imperious. The one time Premier league winner struck twice as Dreams F.C shellacked King Faisal 4-1.

The Patrick Razak story is another one we know too well.

For a team whose best attacker, Joseph Esso, is running down his contract, it is crazy to think Hearts have said no to the chance to sign Patrick Razak, Emmanuel Ocran and Kelvin Andoh all for free.

In principle, it is not out of place for a coach to insist on only signing players he wants. More so when he is also the director of football. So Grant may well have a case but on these streets, coaches don’t always have their way. Club hierarchy, fans do and the earlier he blends the reality on the ground with what happens in the grand scheme of affairs, the better it would be for him.

Grant’s relationship with the players.

After Sunday’s defeat, Fatawu Mohammed admitted not being at his best while attributing it to a lack of game time. It was true. Fatawu was not played versus Skyy F.C. He then played 15mins in the friendly with Etoile Filante in Togo but was dropped again for the games against Okyeman Planners and Asante Kotoko all without explanation. Joseph Esso, Mohammed Alhassan and Robert Addo are reported to have all fallen out with the coach. Having reached saturation point, Mohammed Alhassan last month asked Grant to ‘tell him what his problem’ is. The gaffer declined and the pair had to be calmed by teammates in a scuffle that ensued.

While suggestions of losing the dressing room may be far-fetched, it is obvious Grant has managed to alienate the senior figures in his team.

When fans have questioned him after poor results in preseason, Grant’s retort has been that he was not hired to win friendlies. He may be right but his certificate saga, his cussedness in the club’s transfers, his relationship with the players and fans have weakened his position.

Grant has become a bête noire rather than the symbol of hope and renaissance the fans hoped he would be. Grant knows this more than anyone else and if he wants to keep his job, he knows what to do. Or does he?