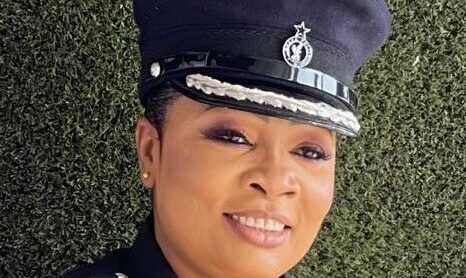 Deputy Commissioner of Police (DCOP) Faustina Agyeiwaa Kodua Andoh-Kwofie, the director general of the Ghana Police Service’s intelligence division, has been named the new director general in charge of the Criminal Investigation Department (CID), taking over for COP Ken Yeboah, who retired yesterday.

After years of exemplary service, Commissioner of Police (COP) Isaac Ken Yeboah announced his retirement yesterday, September 22, 2022.
At a ceremony held in his honor at the National Police Training School in Accra, COP Ken Yeboah was removed from the service.

He had been in the service for about 31 years when he reached the mandatory retirement age of 60.

DirDCOP Andoh-Kwofie served as the Director in charge of the Commercial Crime Unit under the CID at the National Police Headquarters until she was promoted to the position of Director General Intelligence last year; as a result, she comes to her current position with a wealth of experience in investigations into fraudulent transactions, financial crime, such as money laundering, among other things.

She has several years of experience in active policing and has advanced through the ranks through her own dedication and hard work.

She has held numerous command positions in the Service, including former Sakumono District police commander, through her dedication, extensive experience, and legal training.

She is a member of the International Police Women Association and actively participated in the creation of the national action plan for the abolition of child labor in 2007 at Sogakope. She also served on the committee set up by the former IGP Kwarteng Acheampong in 2007 to review the curricula used by the Ghana Police College. Since 2016, she has also served on the board of the Africa Center for Counter-Terrorism.

She graduated from the Ghana Law School with an LLB and has been admitted to the bar since 2013, which speaks volumes about her desire to achieve academic success.

DCOP Andoh-Kwofie attended St. Monica’s Secondary School and Nsutaman Catholic Secondary, respectively, where she served as the Girls Prefect from 1988 to 1989 and the Assistant Head Girl from 1990 to 1991.

She is a mother of two boys, a Presbyterian, and a native of Kwamang in the Sekyere Central District of the Ashanti Region.

Her husband, COP Stephen Andoh-Kwofie, passed away in the line of duty in 2015.

She likes doing research on current policing trends and ways to fight crime.