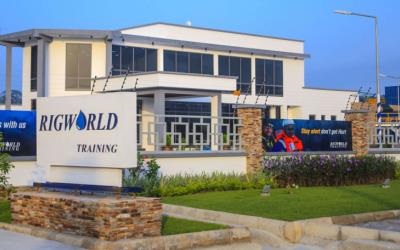 The RIGWORLD Training Center could have been vandalized if the police had not intervened Sunday night, when some residents of the host community (Kejebir) stormed the premises over suspicion that the company is housing ‘COVID 19 infected persons’.

News broke of the conveyance of some twenty (20) workers that have been instructed to be ‘quarantined’ at the facility last Friday evening. This rumor triggered a panic reaction from community, as they suspected the company of being negligent in the handling of the matter.

Public Relations Officer for the company, Roger Agana told Skyy News’ Abraham Mensah the company couldn’t have compromised on the health and safety of their personnel and that of trainees. He said those rumors are untrue and must be disregarded.

“They are not being quarantined. This facility is not a medical center or a holding area. They are our workers and they usually are being accommodated here before they move to the rig” he noted.

He disclosed that a call was placed on the National Ambulance Service to run a temperature check on the workers to clear off the misconception.

“They found out that none of them were with the virus nor showed symptoms of the disease” Mr. Agana said.

Mr. Agana added that the company often house workers that are due for an offshore activity at the training facility, and that the community is much aware of these procedures.

He intimated that the company is adherent to strict health and safety protocols, as required in the oil and gas industry.