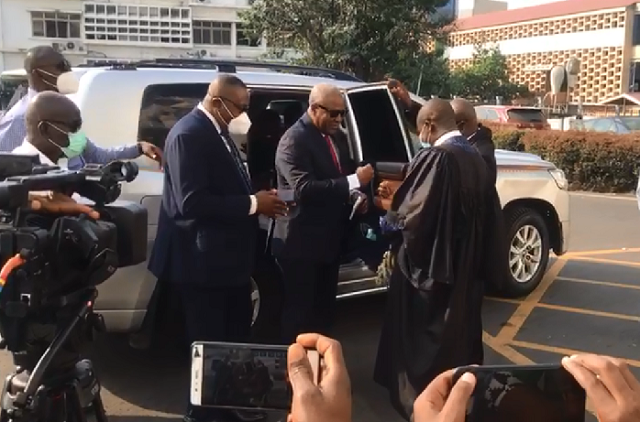 The Supreme Court has dismissed the election petition brought before it by John Dramani Mahama, the 2020 Presidential Candidate of the opposition National Democratic Congress (NDC).

“The petitioner did not demonstrate in any way how the errors [committed by the EC] affected the declaration of the election…We have therefore no reason to order a re-run [of the polls]. We accordingly dismiss the petition,” Chief Justice, Kwasi Anin-Yeboah said while reading the ruling of the court on Thursday, March 4, 2021.

John Mahama was challenging the results of the polls insisting that none of the nine presidential candidates obtained the mandatory 50%+1 vote constitutional threshold to be declared the winner of the polls.

In his petition filed on December 30, 2020, Mr. Mahama sought five reliefs from the apex court. He among things asked the Supreme Court to declare the EC’s declaration of President Nana Akufo-Addo as the winner of the polls as unconstitutional, null, and void.

He also asked the apex court to order the Electoral Commission (EC) to conduct a re-run of the election between himself and President Akufo-Addo.

The petitioner called three witnesses to make his case at the court–Johnson Asiedu Nketiah, Dr. Michael Kpessa-Whyte and Rojo Mettle-Nunoo–and they were cross-examined.

Mr. Mahama in his closing address insisted that he discharged the burden of proof placed on by the constitution.

But the Respondents — the Electoral Commission and President Akufo-Addo– urged the apex court to dismiss the petition.

They argued that the petition was incompetent, lacked merit, and raised no reasonable cause of action.

In its ruling, the Supreme Court said the petitioner failed to prove his case via his petition or through his witnesses.

Chief Justice Anin-Yeboah who read the ruling said the accounts of Rojo Mettle-Nunoo and Dr. Michael Kpessa-Whyte were immaterial to the case since the issue in contention had nothing to do with how the results were collated at the Electoral Commission’s national collation centre popularly known as the Strongroom.

“Their testimonies were unworthy in the settlement of the issues,” Justice Anin-Yeboah said.

He said Mr. Mettle-Nunoo and Kpessa-Whyte should instead have themselves to blame for abandoning their post while the collation of the result was ongoing.

He explained that the court need not focus on the strength of the case to determine whether or not the court has jurisdiction in the matter. The fact that a parties case may be weak is no grounds for striking it out.

The Supreme Court also stated that it was absolutely wrong to hold on to the error made by the EC against the commission as the error was subsequently corrected. Anin-Yeboah said Mahama’s legal team could not also provide any statute to the effect that the EC needed to consult stakeholders before effecting corrections.

On this issue, the court said it was established in court that President Nana Akufo-Addo crossed the 50%+1 vote requirement even without the results from Techiman South constituency prior to the declaration of the presidential results on December 9, 2020.

Declaration vs violation of Article 63 (3) of the 1992 Constitution: Judgement –  The error committed by the commissioner cannot void the declaration. Agreeing to the petitioner’s case will mean errors by the commission in a post will nullify the truth of the statement even if that is not the case.  The Commission did not act in violation of Article 63(3) of the 1992 Constitution. The petitioner has not been able to prove that none of the candidates got more than 50% of the total votes cast.

Whether alleged vote padding and errors affected the outcome of results: Judgment – We find the allegations of vote padding very serious. We have observed already that this allegation was not proven by the petitioner. Evidence proves that even if the vote padding occurred, it would have been insignificant to overturn the election result. The Petitioner did not adduce cogent evidence to back this claim. The court expected the pink sheets to be exhibited to prove the claims. Allegations of wrong aggregations of votes were not proved. Even if the vote padding was accepted, it will not impact the validity of the votes of Nana Akufo-Addo.