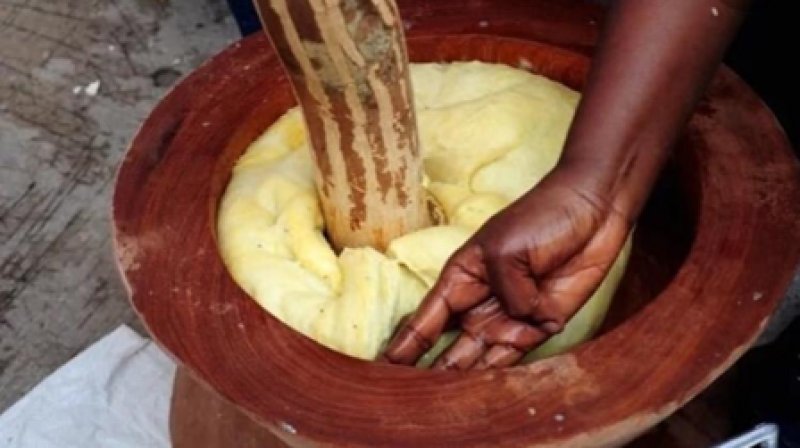 Science and Technology are truly changing and transforming the world at an alarming rate. Technological advancement is making it simple and easier to undertake processes and procedures which were hitherto, tedious, time-consuming, heart-wrenching and energy-sapping, to be done in a friendly, simple and comfortable manner.

One of such technological innovations which have come to save many Ghanaians, especially the younger generations is the introduction of the ‘Fufu’ pounding machine.
‘Fufu’ is a traditional delicacy of the Akan tribes in Ghana, but it is consumed by millions of other Ghanaians in all parts of the country as well as other West African neighbours.
It is said that an Asante man who has eaten several other foods apart from ‘Fufu’ will still consider himself as not eaten the whole day.
This tells how ‘Fufu’ is important to the Asante people and other Akan speaking tribes in Ghana.
‘Fufu’ is a mixture of pounded dough of cooked cassava and either plantain, cocoyam or yam.
This mixture had for several years been manually prepared by two or more persons through the use of a wooden mortar and pestle.
It can be eaten with any kind of soup but the typical Asante ‘Fufu’ lovers prefer eating it with palm nut soup (Abe Nkwan) ‘Abunabunu’ (Kontomire and other green plants soup) and groundnut soup.
However, many of the young generation ‘Fufu’ lovers prefer ‘Light’ soup, made with pepper onion and tomatoes, which is very simple and easy to prepare.
The tedious, time consuming and energy sapping nature in the preparation of this traditional food, coupled with the hustle and bustle of urban life and the limited time available to many people, especially those in the formal employment sector and other demanding tasks, make it almost impossible for people to eat this delicious traditional food as often as they would have wished.
It is for this reason, that the introduction of the ‘Fufu’ pounding machines and the turning of the cassava, plantain, cocoyam and yam into a powdered form to make it easy to prepare, have been welcomed by many people.
The first ‘Fufu’ pounding machine was developed in 2004 by a Ghanaian electrical-equipment dealer called Fadegnom Charles, who produced small numbers of electrical ‘Fufu’ machines for local consumption. 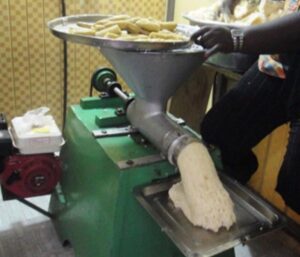 As it was becoming popular, a team of scientists from the Kwame Nkrumah University of Science and Technology (KNUST) led by Professor Kwadwo Kesse, Dr Lawrence Ansong and R.E Doodo, designed and engaged in mass production of the machines for the local market.
The machines saw significant adoption in both homes and on a commercial basis in Accra in 2014.
In 2017, a Togolese entrepreneur named Logou Minsob invented the model ‘Foufou’ mix, which allows efficient mixing of the combined food items into a well-set fine ‘Fufu’ texture with consistency.
The introduction of these machines for both domestic and commercial use has helped to make it easy for many people to prepare this delicacy, which could be eaten three times a day by many people.
It has also led to many young Ghanaians discovering their roots and turning back to their local food.
In many rural communities in Ghana now, the ‘Fufu’ pounding machines which are being operated in the same ways as corn mills, are not just helping to reduce the burden of women in the preparation of their evening meals but also helping them to put food on the table in just times.
The technology is also creating employment for many people in communities while making it easy for the big chop bars and restaurants to also serve their customers on time.
The time when a strongman had to pound the ‘Fufu’ for several hours with a lot of sweats falling into the food before it was served to customers has passed and gone, making the ‘Fufu’ healthier.
‘Fufu’ lovers who stayed in storey buildings are now also not having issues with their landlords with regards to where to pound the ‘Fufu’.
This is because some of the machines are so small that people could use them in their rooms to prepare the food.
As Mrs Mavis Akosua Akyaa, a young accounts officer at one of the government health facilities in Kumasi, who is very much pleased with the production of the ‘Fufu’ pounding machine emphatically put it “the person who discovered this ‘Fufu’ pounding machine is the greatest scientist in the world”.
Her husband, David, is a mechanic at the Suame Magazine whose favourite food is ‘Fufu’ he can eat it three times a day if he gets it.
This means Akyaa has to wake up early every morning to cook and pound the ‘Fufu’, in the compound house, to the annoyance of some of her co-tenants.
The invention and the introduction of the ‘Fufu’ pounding machine as well as the availability of the processed cassava and plantain floor on the market, which make it very easy for her to prepare this traditional delicacy for the husband, is, therefore, a welcoming feat.
Like Akyaa and many others in her situation, the scientific breakthrough in the preparation of ‘Fufu’ is indeed welcoming news and it is now changing the eating pattern of many young Ghanaians from junk foods to homemade foods which are more nutritious and healthier.
Even though some people still use the old manual way to prepare their ‘Fufu’ the acceptance and the use of the pounding machines have come to stay and would encourage many people to return to their roots.
SOURCE: GNA