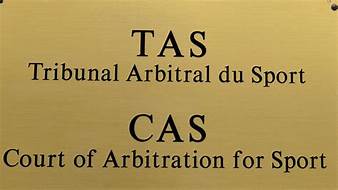 How CAS Ruling on The Phar Rangers Will Affect Zone 3

By skyypowerfm On Aug 6, 2019
0 15
Share
The court of Arbitration of Sports Ruling on the case brought to it by Phar Rangers have brought some amount of uncertainty in the division one fraternity, with lots of clubs uncertain of their position.
The CAS in its ruling ordered the GFA to award 3 points and 3 goals to Phar Rangers in the game against Okwahu United, and alluded to the fact that in the GFA disciplinary Committee ruling of October 18, 2017. Okwahu United should have lost all matches it played after March 12.
This then means those who played against Okwahu United beyond this date should be awarded points.
The facts of the case is that, Okwahu United suffered the fine against Tudu mighty Jets after Match day 14, and counting the 14 days at which fines are paid, then the forfeiture of points begins from Match week 18.
Okyeman Planners, and Phar Rangers were few of the teams that played against Okwahu United after Week 18.
Planners lost their week 29 fixture of which they protested for points.
The CAS ruling reinforces the protest of Okyeman planners, and request Phar Rangers to benefit from same.
The final standing for Zone 3 of the 2017 division one league saw planners finishing 4th with 41 points.
With the latest ruling, Phar Rangers, who finished 13th with 38 points, will now move to 4th with same points as Planners.
This then means Tudu Mighty Jets who finished 12th will fall to 13th position and if the GFA applies this latest ruling, Both Planners and Rangers will remain safe.
This is also because that season saw two premier league sides Tema Youth and Great Olympics relegated to division one, requiring zone 3 to have 4 teams relegating to the regional division two leagues.
Below is the Table for 2017 zone 3. 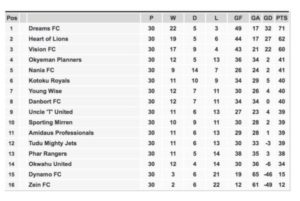