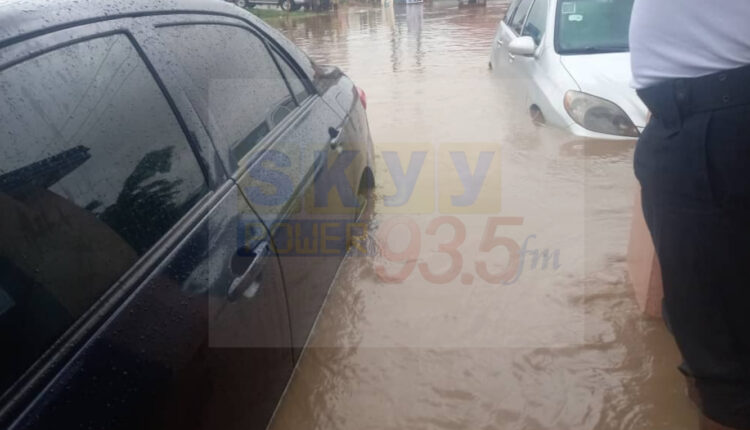 Hundreds of motorists and residents of Apowa and its environs in the Ahanta West Municipality were left stranded for more than eight hours after almost two hours of torrential rains flooded the Apowa to Amanfukumah stretch of the Takoradi to Agona Nkwanta road Tuesday afternoon.

Vehicles that attempted to cross the flood waters were badly battered leaving most of them with broken engines and mangled bumpers.

The rains started at about 2:00 pm Tuesday afternoon. It came thick and fast leaving residents with little time to prepare.

Within twenty minutes, the Apowa to Amanfukumah stretch of the Takoradi to Agona Nkwanta road got flooded.

The water level was waist-deep. Structures along the stretch were submerged leaving only their roofing. The Apowa police station, the frontage of the St. Mary’s Senior High School, two fuel dumps, stores and kiosks were covered with water.

Vehicles of all make and kind with their passengers and goods immediately grounded to a halt and will be in that position for over eight hours.

Those that attempted to cross got badly damaged, some with their engines, bumpers, windows and windscreens torn apart by the intensity of the running flood waters.

Scores of police officers, NADMO officers and other volunteers responded but could only watch on as there was little they could do. After some huffs and puffs, some of the affected cars were pushed to safety.

But the volunteers will wait for the flood waters to recede and that took an agonising eight hours.

Those who have had enough trekked and it took about 50 minutes to traverse the long tailback from one end to the other. School children, the young and aged perhaps had a good exercise.

According to some affected persons of yesterday’s flood that called through the Late Evening Show on Skyy Power FM, it was only after 9:00 pm, from the incident time of 2:00 pm, after the flood waters have somehow receded that the regional police commander and MTTD commander together with the about 60 officers who were at the scene could guide vehicles to safely navigate away.