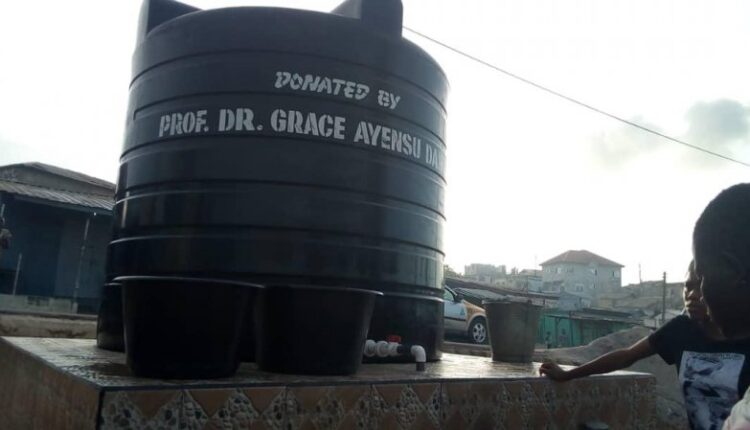 The National Democratic Congress (NDC) Parliamentary Candidate for Essikado-Ketan in the December elections, Professor Dr Grace Ayensu-Danquah has built a mechanized borehole for the Essikado community.

The gesture, follows an acute water shortage in Essikado, which was having a telling effect on the people for the past three months.

Speaking to the Ghana News Agency, Prof Dr Ayensu-Danquah who is a well-known philanthropist, said when she started the mechanized borehole with automatic shut of valve last year, some people in the town read political meanings to the project, saying “Essikado is not a village so why should I build a Borehole?”

Prof Dr Ayensu-Danquah said she ignored the invectives and insults and continued to pay for the prepaid every month”.

The NDC Parliamentary Candidate noted that there had been no running water for the past three months and their only source of water for the entire Essikado and its environs was the mechanized borehole system.

She lamented that people travelled all the way from adjoining towns such as Ngyresia and Mpeasem to fetch water from the borehole.

Prof Dr Ayensu-Danquah noted with concern that all the wells in the towns have dried up.

She said water had no political colours and entreated people in the communities to access the borehole water to mitigate the water crisis in Essikado and its environs.

When the GNA visited the Essikado community, a large number of people had gathered to fetch water from the mechanized borehole as the only two wells in the town had dried up.