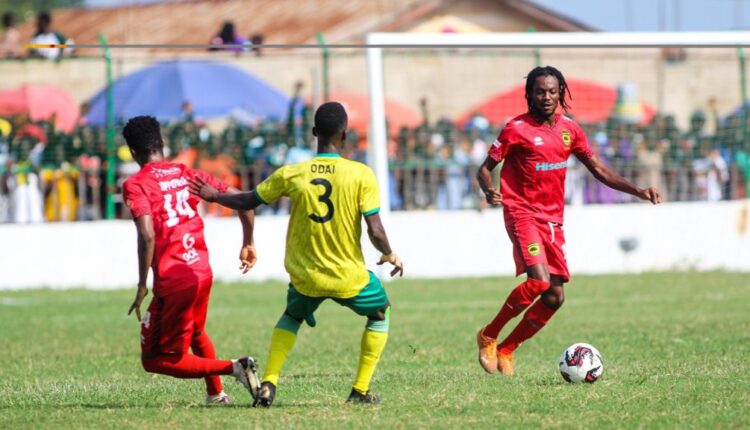 Accra Hearts of Oak continued their dreadful start to the season as they succumbed to a 2-0 defeat at the hands AshantiGold SC at the Obuasi Len Clay Stadium on Sunday.

Goals from Yaw Annor and Abdul Salam scored in the second half ensured victory for the miners as the Phobians who are now in the relegation zone having recorded three points after four matches.

Kotoko continued their blistering start to the season when they beat Eleven Wonders 2-0 at the Baba Yara Sports Stadium.

Isaac Oppong continued his remarkable start for the Porcupine Warriors having scored his third goal of the season with Samuel Boateng providing the other strike.

Kotoko is now top with 12 points and remains the only team who has won all four matches after Berekum Chelsea ended King Faisal’s unbeaten start.

Aduana Stars thumped Real Tamale United 5-1 at the Nana Agyemang Badu Park. The game was rained off on Saturday with the scores at 1-1 with 66 minutes played but the “Ogyaa” Boys rained fire on the RTU as they scored four times on Sunday morning to clinch maximum points.

Bright Adjei bagged a brace in the match with Eric Kwakwa, Yahaya Mohammed and Yussif Mohammed scoring a goal each to ensure an emphatic win for Aduana which was their first of the season.

The Academy Boys are still winless after four matches are in the relegation zone.

Accra Lions secured the first win in the league when they edged Bechem United 2- 1 at the Accra Sports Stadium on Sunday.

The match between Medeama and Karela United was rained off in the 70th minute and will be played on Monday morning.

Below are some results from week four: