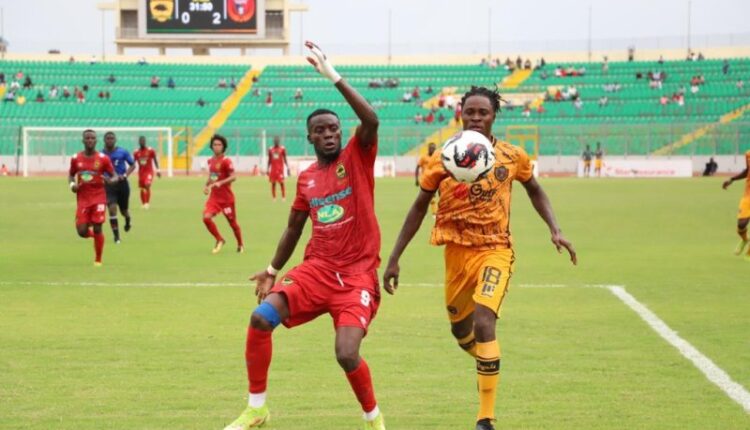 Kumasi Asante Kotoko recorded their fourth loss of the season after a 3-1 defeat against Legon Cities at the Baba Yara Sports Stadium on Sunday.

It was a second loss for the Porcupine Warriors on home turf, having suffered a 3-2 loss against King Faisal earlier in the season.

Kotoko, despite their loss, maintains the top spot with an eight-point gap on Bechem United, who will be in action later on Monday.

Hans Kwofie scored a brace while Michel Otu grabbed the other goal for the “Royals”, who moved up to eighth.

Accra Hearts of Oak got back to winning ways after thumping Accra Lions 3-0 at the Accra Sports Stadium on Friday.

Daniel Afriyie Barnieh scored a brace for the Phobians, while Isaac Agyeniim Boateng scored the other goal to ensure an emphatic win for the Phobians who moved into the fourth position in the league table.

Medeama SC recorded a 1-0 victory against WAFA to move into the third position in the league table.

Vincent Atinga scored from the penalty spot in the 65th minute to ensure three points for the boys in “Mauve and Yellow” at the TNA Park.

At Dawu Park, Samuel Kusi’s goal for King Faisal against Dreams FC ensured a share of the spoils.

Isaah Yakubu gave the home side the lead in the 36th minute, but Kusi struck late in the first half to restore parity for Alhaji Grusah’s men, who held on for a point.

Aduana Stars who were winless in five going into the clash, couldn’t get any points, which has seen them drop out of the top four.