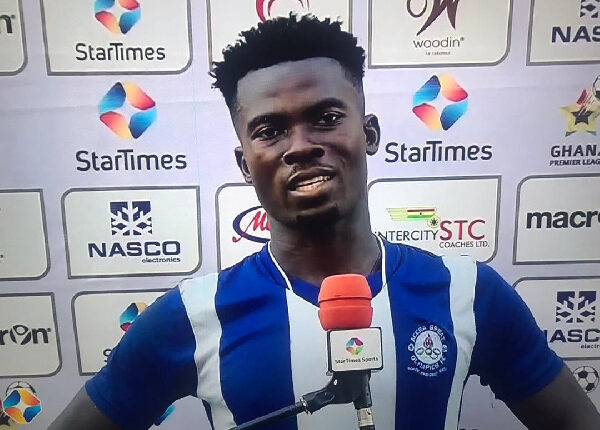 Great Olympics defender Ebenezer Sekyere provided the all-important strike as his side secured all three points against King Faisal in a match-day 14 encounter played at the Accra Sports Stadium on Sunday.

Great Olympics, who had drawn their last three games in the Ghana Premier League (GPL) finally ended their draw streak, edging their counterparts 2-1 and moving into the sixth position on the league table.

Great Olympics right-back Solomon Adomako opened the scoring for the home side on the half-hour mark having dominated the game in the early stages of the first half.

Great Olympics marksman Maxwell Abbey Quaye who returned to action following his brief spell with the Black Stars in Cameroon, proved a very difficult customer to handle for the King Faisal defence.

Despite the dominance in the first half, Great Olympics’ push for a cushion goal couldn’t materialize but held onto their solitary lead at the end of the first half.

King Faisal was out of the blocks very impressively in the second half and deservedly pulled parity through a brilliant header by their marksman Ibrahim Zubairu.

The goal from the away side did really awaken the Dade Lads as they seemed more eager to take the lead with some attacking incursions.

Then came Ebenezer Sekyere who pulled up a sensational close-range effort to beat Kofi Baah in the post for King Faisal in the 78th minute of the game.

The ‘Dade’ Boys did hold on to their lead as they managed to secure all three points at the end of the game.