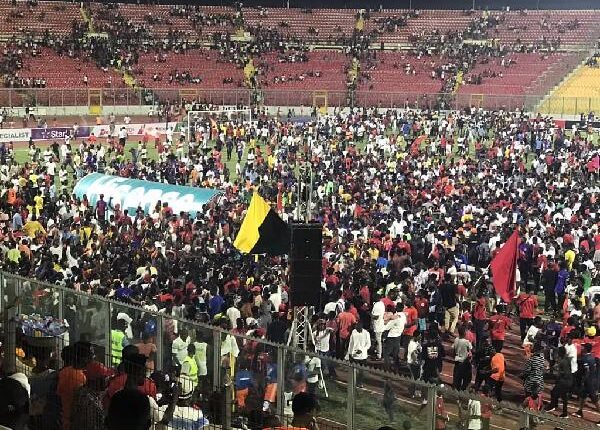 Thousands of fans of Kumasi Asante Kotoko thronged the Baba Yara Stadium on Sunday to witness the coronation of their club as the 2021/2022 Ghana Premier League champions.

It was the first time the fans turned up in that magnitude throughout the season despite the club’s dominant performance which saw them lead the league log by 16 points at some point.

The Porcupine Warriors won the league at the Len Clay Stadium in Obuasi two weeks ago with three matches to spare when they held Ashantigold to a pulsating 1-1 draw.

They however thumped relegated Elmina Sharks  3-0 to crown a night full fanfare, music and  other forms of entertainment.

Popular musicians such as Kwame Eugene and Pat Thomas were on hand to entertain the fans who could not resist their performance and invaded the pitch to have fun.

It was a night that most fans will not be in a hurry to forget because apart from the fun, the two teams also sold good football worth every cedi they spent.
¨C18C Asante Kotoko made the first incursion into the vital area of the visitors after four minutes but Samuel Boateng’s threatening run was curtailed with a timely interception by a Sharks defender.¨C19C ¨C20C

Four minutes later, Richmond Lamptey pulled the trigger from 25 yards, but goalkeeper Maxwell Adom made a brilliant save to deny Kotoko the opener.

The Porcupine Warriors continued to dominate possession despite occasional threats by Elmina Sharks.

A timely interception by Kotoko’s Andrews Appau in the 19th minute prevented what could have been an opener for Sharks whose build up from midfield exposed the Kotokodefence.

Kotoko however broke the deadlock two minutes later through Imoro Ibrahim who sent the ball beyond goalkeeper Adom from a beautiful free kick  just outside the box.

It was all Kotoko after the goal as they pressed for more goals, but the defence of Sharks foiled all their numerous attacks.

The first half ended with Kotoko holding on to the slim lead.

Elmina Sharks resumed the second half more purposeful as they took the game to their hosts, making two quick attempts at goal in less than four minutes.

They came close to finding the equaliser in the 55th but for a point blank save by Kwame Baah who was at the mercy of the Sharks attacker.

As Elmina Sharks continued to push for the equaliser Asante Kotoko scored their second against the run of play in the 34th minute.

It was Fabio Gama who initiated the attack on the right flank as he beautifully went round his marker before releasing the ball to Mbella who laid a pass for Mfegue to connect home.

The Cameroonian import was on hand again on the 43rd minute to connect a loose ball after the defence of Sharks failed to deal with an inswinger.

The visitors would however not give as they pushed more men forward in search of a consolation, but their efforts yielded no results until referee Daniel Nii Laryea brought proceedings to an end.