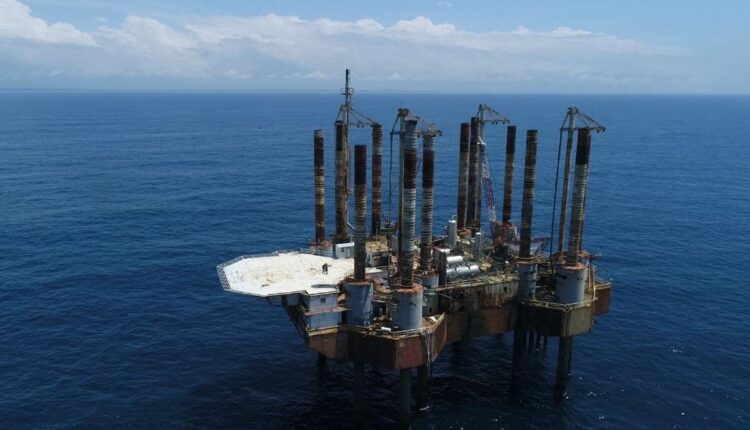 Saltpond Oil Field in the Central Region is currently being technically decommissioned by the Ghana National Petroleum Corporation (GNPC), which started this process on September 26.

This comes after the much-awaited jack-up rig and accompanying vessels from Lagos, Nigeria, which was required to carry out the drill, arrived.

In the company of security personnel, the rig arrived in Saltpond on September 24, 2022, and as of 14:30 on Sunday, it was roughly three hours away from the drilling installation (Mr Louie Rig).

On Monday, the GNPC will formally turn over the platform to the contractor, Hans and Co Gas and Oil Service Providers, and construction will then start right away.

In order to return that region of the sea to its pre-expansion state, the exercise, which is the first of its kind to be performed in Ghana, will permanently seal all six of the oil field’s wells, remove all of the pipes, and fully disassemble the rusted and appalling drilling platform.

To carry out the activity, the required permits have been obtained.

The field covers a five square kilometre area and is submerged to a depth of 85 feet.

At its peak, two of the six drilled wells were producing up to 4,800 barrels of oil per day.

However, by the year 2000, production had fallen to below 200 barrels per day.

As a result, the Ministry of Energy instructed the GNPC to decommission the field in August 2016 based on recommendations from government organizations such as the Environmental Protection Agency.

In order to begin the field decommissioning process in 2018, the Corporation undertook the first phase of investigations and developed a plan that was fully finished and approved by the Ministry of Energy.

Speaking to the media in Saltpond on Sunday, Dr. Kwame Baah-Nuakoh, General Manager, Sustainability and Stakeholder Relations, GNPC, revealed that the oil field was no longer economically viable, which made the decommissioning exercise necessary.

He claimed that the wells and wellheads were in a terrible condition and posed a risk of oil spills, which would negatively affect aquatic life, fishermen’s lives, and people who had facilities nearby.

“If we leave this platform for the next two years, nobody knows what will happen because the structural integrity cannot be guaranteed,” he said.

“virtually all metals have corroded and could cause disaster.”

The drilling installation, according to Dr. Baah-Nuakoh, will be removed, taken to the beach, and recycled or sold as scrap to help the catchment villages grow.

He gave the assurance that all safety precautions were being properly adhered to in order to prevent any disaster, including spilling.

“The plan is to ensure that no hazardous waste is left on the sea. The Corporation has put in place a robust emergency response plan of international standards to manage any incident, in the unlikely event – it occurs,” he said.

“What we are hoping to do is to restore the area to its economic level for fishing and hopefully reassign it to see if we can find oil there because history shows there’s oil there.”

Dr. Baah-Nuakoh issued a 500-meter minimum distance warning to fishermen and announced that the navy will be sent out to execute the order during the decommissioning procedure.

He pointed out that the transfer of knowledge and technology so that future decommissioning would be carried out by Ghanaians was guaranteed as part of the decommissioning deal with the contractor.

He thanked Parliament for their ongoing assistance during the exercise.

In order to gain the support and buy-in of all stakeholders in the impacted catchment villages, Madam Patience Lartey, Deputy Manager, Social Performance and Local Content Sustainability and Stakeholder Relations, GNPC, said that a number of meetings had been held with all of them.

The Chief of Kuntu, Nana Kwesi Brevo III, urged the GNPC to offer the community some development projects as recompense for hosting the oil field since its commencement.