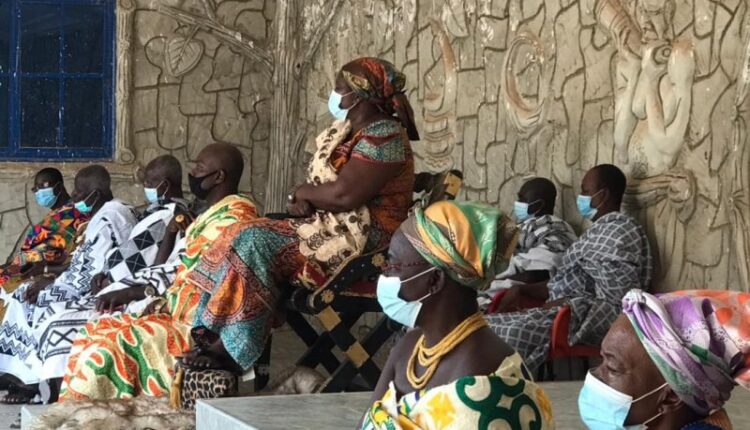 He said the chiefs had no authority or power to stop the nefarious activities of such miners because there were no documents or order for them to halt illegal operators in their communities.

“Give us documents and legal backings to exercise our mandate to drive out illegal miners from our lands” he added.

Nana Boakye made the appeal when the Central Regional Minister, Mrs Justina Marigold Assan called on the chiefs as part a day’s tour to inspect some mining sites in the Region.

The visit among others, enabled the Minister to assess the situation on the ground to deliberate with stakeholders on the process of halting the menace.

The RCC, she indicated, will offer the necessary support and direction to fight illegal small scale mining popularly known as ‘galamsey’ in the Region.

Nana Boakye reiterated that the government’s fight against illegal mining was to prevent the wanton destruction of the environment, particularly water bodies, vegetation cover and other natural resources for sustainable development and called on the public to appreciate that the fight was also about the preservation of human health and the entire biosphere.

He gave the assurance that government would continue to act responsibly to end it.

Nana Nkwantabisa III, Kyidomhene of Twifo Traditional Area, called for the adherence to the country’s environmental laws and policies to improve the surroundings, living conditions and the quality of life for both present and future generations.

He said contaminated water bodies and the soil would eventually be used for farming and consequently the quality of food stuff produced, affected.

Nana Nkwantabisa, added that unscientific method of using toxic metals also caused the release of inorganic mercury into the atmosphere and when inhaled might lead to acute poisoning that could cause dizziness, headaches, memory and speech loss.

“We are killing ourselves day by day by the unscrupulous acts by galamseyers, since our water is mixed with toxic metal and we drink it daily”

He appealed to the government to seek the consent of traditional authorities before granting concessions to mining companies because as it stood now, illegal miners could not be detected as they all had documents covering their operations.

Nana who doubles as the Chief of Enyinase thanked the President, Nana Addo Dankwa Akufo-Addo on his tireless efforts at saving and protecting the lives of the populace during the pandemic era.

Osiadieyo Besiken II, Omanhene of Twifo Atti Mokwa Traditional Area urged the government to support and back chiefs in the fight by rolling out taskforces in the various communities to assist the chiefs.

He said the perpetrators were living amongst them and therefore urged the public to desist from politicizing the fight against galamsey since that gave the offenders hope to destroy land and water bodies.

The Omahene called for collaboration to help save the Country’s water bodies for the generation yet unborn.

Mrs Assan expressed gratitude to the chiefs and people for their determination to push the agenda to end galamsey.