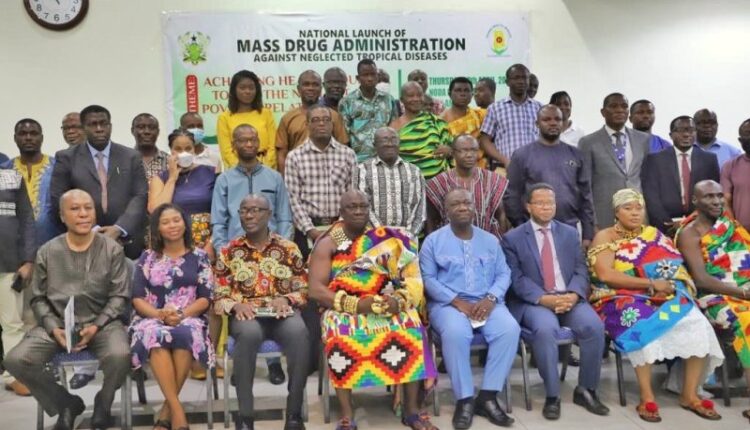 The Ghana Health Service (GHS) is seeking to administer drugs to more than 13 million people in 81 districts under the Non-Tropical Disease (NTDs) Programme.

This formed part of processes to eliminate Onchocerciasis (Oncho) and Lymphatic Filariasis (LF) by 2030.

Dr Anthony Adofo Ofosu, the Deputy Director-General of the GHS, disclosed this at the national launch of the 2022 mass drug administration against NTDs in Kumasi.

The event, which on the theme: “Achieving Health Equity to End the Neglect of Poverty Related Diseases,” brought together key stakeholders, development partners and civil society organisations (CSOs) in health.

The launch was a prelude to various training activities for health professionals and community volunteers who shall supervise the exercise.

Dr Ofosu said oncho and LF could be targeted through a highly effective integrated community treatment approach, using drugs that had proven to be safe and effective.

“This approach, known as Mass Drug Administration (MDA), provides a single dose medication to all eligible individuals once or twice a year. When implemented over three to seven years, the MDA can significantly reduce the burden of NTDs, and in some cases, elimination can be achieved,” he said.

The NTD caused significant morbidity and mortality nationwide and more than one billion people across the world suffered from one or more NTDs that caused disability, severe disfigurement and blindness, Dr Ofosu said.

The diseases affect the world’s most vulnerable population with devastating and life-long disabilities that promote poverty.

“These patients are not only physically disabled but they also suffer mental, social, and financial losses, contributing to stigma and poverty.”

Dr Kofi Asemanyi-Mensah, the Programme Manager, NTDs, said Ghana was endemic for all five NTDs, which required the MDA for control.

He said Lymphatic Filariasis was endemic in 114 out of the 260 districts whereas oncho was prevalent in 137 districts, which cut across all 15 regions except for the Greater Accra Region.

The goal of the MDA was, therefore, to reduce the prevalence of NTDs in Ghana to the level that was no longer of public health significance by 2030.