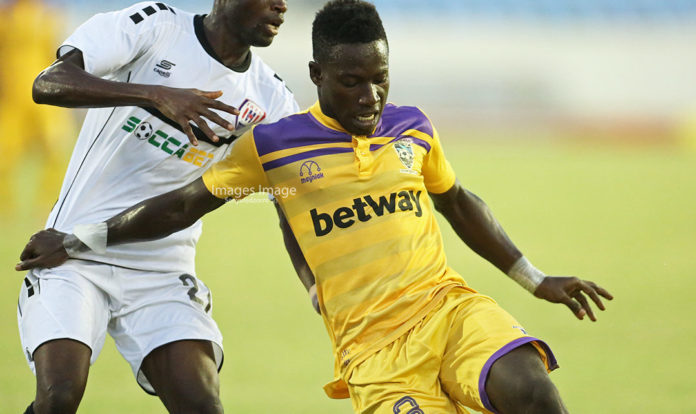 The Disciplinary Committee of Ghana Football Association has docked Medeama S.C six points for fielding an unqualified player in their matchday 12 game versus Great Olympics at the Akoon Park in Tarkwa.

The decision follows a protest by Olympics, challenging the eligibility of Medeama forward, Nana Kofi Babil for the match in question. In their protest filed after the match, Olympics argued that Medeama’s decision to field the said player, was contrary to Article 28(1)(e) of the Premier League Regulations 2019 because the player had received cautions in three league matches (Matchdays 1,6 and 11).

According to the Olympics, the player was therefore automatically suspended or ineligible to feature in the Matchday 12 game for Medeama SC against Accra Great Olympics FC at the Akoon Park, Tarkwa on March 2, 2020.

Olympics then attached the caution letters for Matchdays 1, 6 and 11 as evidence and the starting lineup for the Matchday 12 league match. Subsequently, the capital-based side asked the Disciplinary Committee to punish Medeama SC by forfeiture and to award the match points to them in accordance with Article 33(1)(e) and Article 33(2) of the Premier League Regulations.

They further claimed that the operative clause would have been a caution EACH in three
league matches or would have read “an unqualified player is a player who has received a
caution in three SEPARATE league matches”.

The Respondents, therefore, claimed that ”the provision which Accra Great Olympics FC wishes to invoke is invalid and cannot be applied for the offense they are alleged to have committed. The Respondent further stated that it would be unfair, unjust and a miscarriage of justice to suffer any sanctions based on the application of the said law”.

Medeama SC, therefore, called for the protest to be dismissed in light of the fact that the said law, according to them, is unmeritorious and lacks clarity. Medeama also called on the GFA to amend the said law so that it can have proper meaning and effect as captured in Article 29(1)(e) of the repelled GFA General Regulations.

The committee established that Nana Kofi Babil ha did indeed been cautioned on three separate occasions and that, the Medeama had been duly notified after each match by the Competitions Department and the Competitions Management system.

The committee also confirmed the player’s participation in the said match, having established that he was unqualified to play due to his accumulation of yellow cards. The committee then said ”there is no ambiguity in the provision and that the
absence or otherwise of the word “EACH” does not create any ambiguity whatsoever in
the provision”.

In view of the above, Medeama S.C has been declared losers of the match, and accordingly, three(3) points and three(3) goals are awarded to Olympics FC pursuant to Article 33(1)(e) and 33(2) of the Premier League Regulations.

Beyond that, Medeama SC will further lose three (3) points from their accumulated points
from previous matches in accordance with Article 33(5)(a) of the Premier League
Regulations.

Medeama SC has also been fined an amount of Five Thousand Ghana Cedis
(GHc5,000.00), 50% of which shall be paid to Accra Great Olympics in accordance
with Article 33(5)(b) of the Premier League Regulations.

Finally, in accordance with Article 33(5)(c) of the Premier League Regulations,
Medeama SC is hereby fined an amount of One Thousand Ghana Cedis
(GHc1,000.00) as transportation expense of Accra Great Olympics FC.

Ghana football’s abusive relationship with superstition; the case of Kotoko at Aduana.

Tramadol is now a narcotic drug

Protect your liver with whole grains: Study finds they reduce the...

US Navy tours the Gulf of Guinea, treats residents of Sekondi...

Fuel produces to be slashed by 15%.