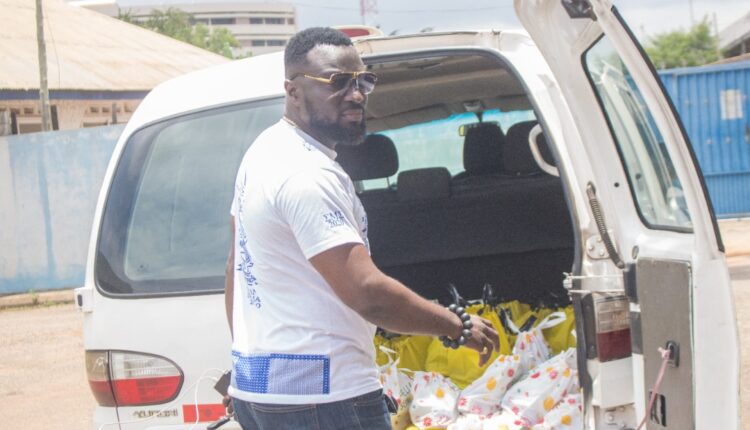 In his bid to give back to society and touch lives, Asaase Radio’s Jonas Abedi Anim chose to celebrate his 40th birthday with the needy on the streets this year.

In partnership with International Non-Governmental Organization Phi-Beta-Sigma, the Asaase radio Broadcaster served 100 people on the streets from the Airport Ofebia Highway through to the 37 Military Hospital junction with hot meals, bottled water and assorted drinks on Wednesday 31 August 2022.

In an exclusive interview with Asaase Radio, Abedi Anim said “As part of my birthday and believing in the culture of service for humanity, I have decided together with my brothers to feed one hundred people right now on the streets and to donate books and stationery items to kids who are in deprived schools, that is what we stand for that is what we believe.”

Aside from feeding the needy on his Birthday, He and the organization are embarking on a course to offer education and support to brilliant but needy children in deprived communities. Some of the items provided to equip the children include Bag packs, learning materials and other stationary items.
He said, “We will be teaching the children in deprived schools on how to read and write and those that express high interest and perform well, we will see how we can transition them into the formal education Centre and offer them scholarship programs.”

The Ghanaian Broadcaster has worked with various organizations and companies.
After high school, He started working as a team leader for the Parent and Child Foundation (PACF), a nonprofit organization based in Ghana. He also led a team which worked with UNICEF on a project to sensitize the coastal belt of Ghana against child trafficking and child abuse from 2002 to 2005.
For much of his life, Abedi Anim has worked as a sound engineer and a videographer for several television and radio stations in Ghana.

He worked as a news anchor at NET2 Television, producing and anchoring a youth and student-centered syndicated television show called, CampusFile.
Jonas also worked with the PAC12 Network as a Freelance Broadcast Engineer and at the same time worked with NBC’s Local station KMTR as a Production Assistant.

He has diverse educational background that includes an international diploma in broadcast journalism, newspaper reporting, and media law from the Institute of Commercial Studies in the United Kingdom. At the University of Ghana, he read political science, English and linguistics. After a period he got transferred to the University of Oregon where he read journalism as his major among other public relations and multimedia programs
Abedi Anim is presently working at Asaase Radio where among other things he produces one of the station’s flagship shows Sunday Night which has so far had former heads of state, Ex-Presidents and Diplomats in and out of the country.

Phi Beta Sigma has deep roots in Ghana, the country’s first Prime Minister Kwame Nkrumah was initiated into the fraternity when he was a student at Lincoln University in 1942. Its Chapter in Ghana Sigma Mu Sigma has already begun its service to Ghana partnering with TEAM CSR for the implementation of their initial project.

Speaking to Asaase news, A member of Phi Beta Sigma Tito said, “ Aside from the community service that we offer, the organization is more of also networking, whoever is a member gets to benefit from great networks as we have so many people who have been members of Phi Beta Sigma including America’s former President Bill Clinton .”

The group has so far supported Rural Water Supply in the form of Boreholes to respond to the lack of clean water and related health issues in remote areas in the country.