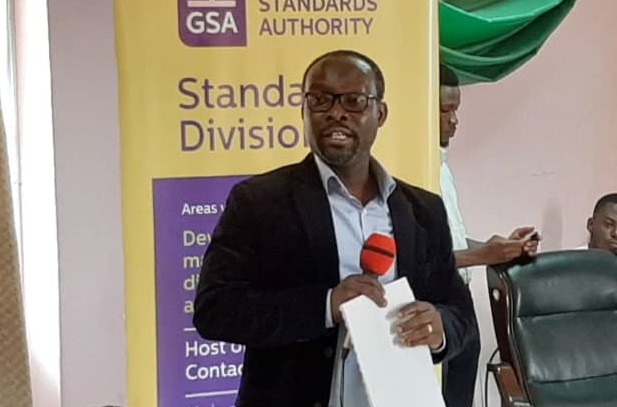 The Ghana Standards Authority have begun sensitizing the various Metropolitan, Municipal and District Assemblies on the Ghana Building Code. The exercise has been extended to the Western Region. The Ghana Building Code (GS 1207:2018) establishes minimum requirements for building using prescriptive and performance- related provisions. The enforcing authority, Ghana Standards Authority, will with the support of the local assemblies ensure compliance to the code in order to safeguard quality infrastructure in the country.

In lieu of which, permit applications, processing and permit issuance, inspection of sites and works, approval of materials and equipment, and validation of construction documents.

Standards Officer of the Ghana Standards Authority, Emmanuel Obeng in an exclusive interview with Skyy News explained the that the code envisaged the design and construction of all structures, materials, and to a greater extent future innovations in the industry.

“It’s relevant, especially in our time now, to curb the wanton development that sometimes results in collapse of buildings that are even under construction, collapse of buildings during habitation and that of fire situations and the rest. It has requirement for almost every scenario, for fire, for seismic and for wind loadings, so that if we look at the requirement of the code equivalent and we go by it, the safety of the building is guaranteed, safety or the occupant is guaranteed and safety against all other eventualities are also guaranteed” he stated.

Mr Obeng mentioned that the various local assemblies will be issued copies of the Ghana Building Code to guide activities as prescribed for the works department.

“In fact by law it is the district assemblies, the works department that has a jurisdiction to regulate the industry in terms of the design, construction and giving approval for habitation. So if you go to them for approval to put up a structure, they vet the structure, they make sure that you construct according to the information you have given to them in the plans and specifications, and they will look at all that during the construction stage, confirm it, and when it is finished, they give you a certificate of occupation. It means that you can now occupy your own building” he said.

He continued that the department will be tasked to undertake routine monitoring visits at construction sites and developed structures to assess compliance to the code and per permits issued.

“And even with that, they monitor from time to time of such buildings so that you will not change change the occupation. For instance, if you want to do an alteration to your building, you have to go to them to seek for a permit, even if your structure is weak and you want to demolish you have to go to them for a permit approval and supervise the work”, Mr. Obeng emphasized.

Dean of Metropolitan, Municipal and District Chief Executives in the Western Region, Wilson Arthur expressed satisfaction with the document. He however suggested that some intensive media publicity and education is undertaken to deepen knowledge and acceptance by the masses.

“We’re going to engage them and then see how we can implement that. It’s a good thing. Standards is the way to go. We need standards. We need to enforce standards. But you know the challenge. I mean, we have done things in a certain way for decades. And then one day we wake up. You’re telling me I have to go by certain standards. A lot of education, a lot of engagements needs to be done to make people shift the attitudes because it takes a paradigm shift” he noted.

He argued that public appreciation of the relevance of having buildings and other structures certified, would trigger responsive action for compliance on the part of manufacturers and suppliers.

“I anticipate that we have a lot of challenges, but if they support us with a lot of media, promotions so that people will know and such that ordinary people who want to rent a house will ask questions- Can I see your standards authority certification? If its demand driven, suppliers will sit up and they will go for it” he stressed.