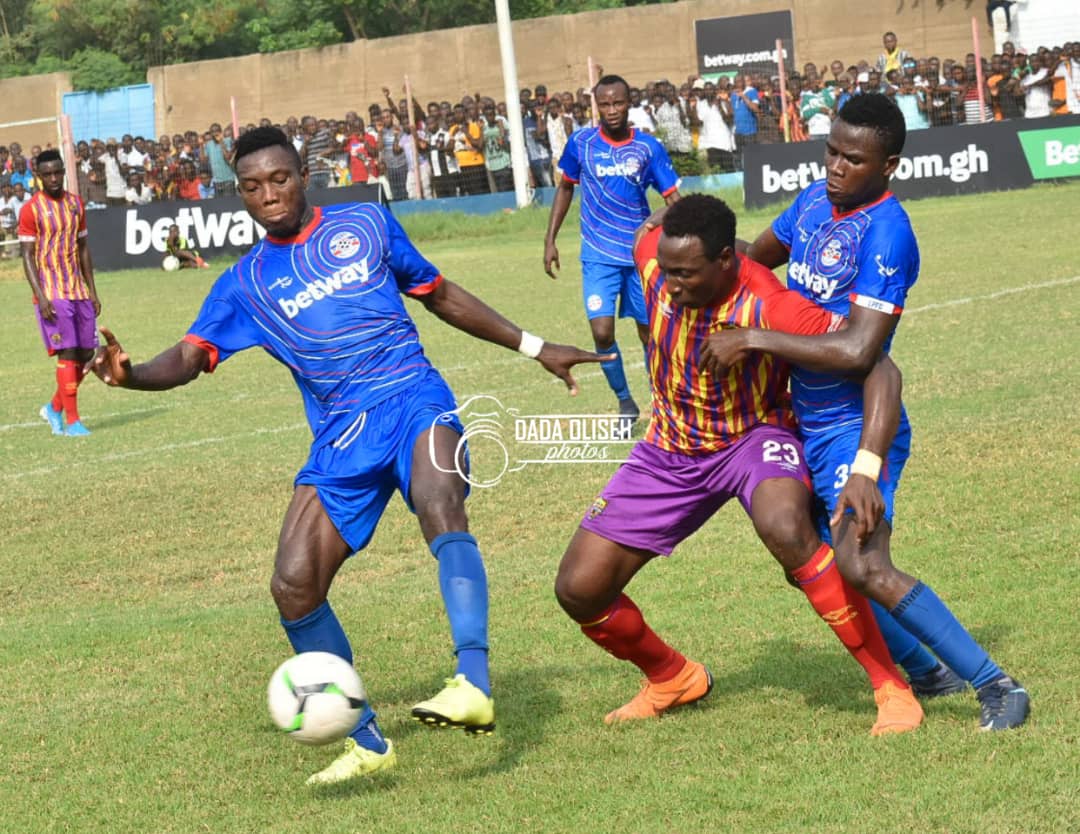 Ghana Premier League round up, Hearts pull off come back win, Kotoko leave it late versus Dwarfs.

Berekum Chelsea went top of the Ghana Premier League after notching an impressive 0-1 win over Ashantigold at the Obuasi Len Clay Stadium. Kofi Owusu profited from some poor goalkeeping to poke into an empty net on the 53rd minute. Chelsea held on from there to record another clean sheet and importantly, win over favorites Ashgold on Saturday.

On Sunday, Accra Hearts of continued their renaissance with a remarkable 2-1 win over Liberty Professionals at the Dansoman Karl Reindorf Park on match day 5 of the Ghana Premier League. Hearts suffered an early set back after conceding in the first minute of the game following Matthew Sefa’s header from a corner kick. Hearts probed for the leveler and came close to finding that after Raddy Ovouka’s cross found Joseph Esso who shot feebly after controlling with his chest on the cusp of half time.

Hearts kept probing and got what their effort deserved when substitute Bernard Arthur headed home from the rebound after Kofi Kodji’s effort was parried by Ganiyu. Two minutes later, provider turned scorer as Kofi Kodji rifled home a cross from the right after 87 minutes. The win means Hearts have now picked 7 points from 9 in their last three games, having picked none from the opening two. The result takes them up to 9th on the log, 3 points behind 4th placed Ashgold.

Elsewhere a late goal from 16-year old Matthew Cudjoe settled nerves before a second from Richard Arthur broke Ebusua Dwarfs resolve as Asante Kotoko won the first of five home games without fans at the Baba Yaro Stadium. Asante Kotoko move up to 6th on the log, a point from the top four place 4 points from leaders, Chelsea. The result halts a losing run of two and sets the tone nicely for Sunday’s cracker with Hearts of Oak in Accra.

Meanwhile, table toppers Medeama S.C suffered their first set back of the season as they failed to recover from an early goal at Dreams F.C. Ibrahim Issah took full advantage of Medeama goalkeeper Eric Ofori Antwi’s poor clearance as he fire home from close range. The result halts Medeama’s unbeaten run of four games; winning three times and drawing once.

In other games, two free kick goals from Yahaya Mohammed and Noah Martey were enough for Aduana Stars to see off Legon Cities. The former League Champions are still without a win after the defeat to Aduana who move to second place behind leaders Berekum Chelsea.

On Monday, Bechem United will host Eleven Wonders at the Nana Fosu Gyeabour Park at 3pm.