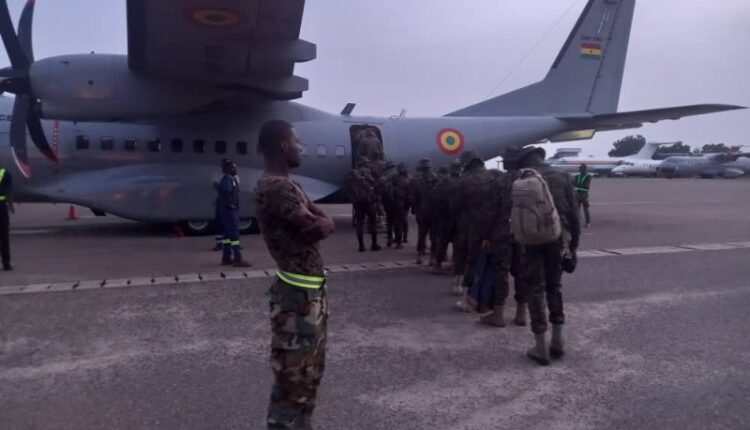 The Ghana Army will for the first time participate in a large-scale multinational Counter-Terrorism Training codenamed, “Exercise African Lion” 2022 in Agadir, Morocco from June 11 to June 30, 2022.

The 32-member troop were airlifted at 0600 hours from the Airforce base, Burma Camp on Friday aboard the CASA 295 military aircraft.

The objectives of the training are to, among others, improve the Army’s ability to plan and conduct Counter Violent Extremist (CVE) operations, improve air-to-ground integration between the Ghana Army and Ghana Air Force, and enhance force interoperability and expose troops to multinational operational training.

The Chief of Army Staff, in his address to the troops, reiterated the need for more training and collaboration to produce “highly trained, motivated and well-resourced soldiers” capable of dealing with the fast-changing phase of modern terrorism.

“…Modern threats cannot be fought by one country, it is a concerted effort, Major Oppong-Peprah, Chief of Army Staff, told the soldiers.

The Army Chief commended the Ghana Airforce for assisting them. He charged the troops to be “ambassadors of Peace” during their training in Morocco.

On his part, the Chief of Air Staff, Air Vice-Marshal Frank Hanson, stated how the Airforce had previously supported the Army on several occasions with aircraft and will continue to do so with their operations

“This is not the first time. The Airforce has escorted our forces to South Sudan…we have done it in several parts of West Africa under ECOMOG and Mali and this is no different”. He explained.

Shortly after, the troops were led in a single file to board the aircraft.

The Ghanaian soldiers are expected to train alongside their American, Moroccan, Senegalese and Tunisian counterparts.